Over the past five trading days, U.S. telecom stocks have witnessed a steep decline as the $1.2 trillion infrastructure bill failed to make any headway in the House despite President Biden’s continued efforts to broker a deal between the warring factions of the Democrats. The bill has been stuck in a potential stalemate for weeks, as several progressive Democrats wanted it to be tied to the larger $3.5 trillion budget reconciliation bill that is facing massive backlash from both Republicans and Democrats. As the Oct 31 deadline (set by the Democrats to pass the bill) inch closer, frantic negotiations pick up the pace to dispel the uncertainty brewing within the sector. The Democrats have currently put forth a range of $1.5 trillion to $2 trillion for the social spending reconciliation package, slashing it from $3.5 trillion and abandoning some key provisions within the bill in order to win the trust of the progressives. The ongoing negotiations are expected to lead to a broader consensus on some of the sweeping policies that the government is aiming to implement before the November 2022 congressional elections.

While the policy paralysis continued to cripple operations, the administration aimed to steady the ship by recommending Jessica Rosenworcel as the permanent chairwoman of the FCC. The government also nominated consumer advocate Gigi Sohn for the third empty Democratic Commissioner seat. The five-member FCC was deadlocked with two Republican and two Democratic representations and the government reportedly waited more than nine months to make the due nominations. The current nominations enjoy broad-based support from various advocacy groups and are likely to prove beneficial for the federal government in the long run in implementing key policy changes. The White House is further expected to nominate Alan Davidson as director of the Commerce Department's National Telecommunications and Information Administration, which advises the government on telecommunications and information policy issues and is likely to oversee the funding for expanding the ambit of Internet access to all Americans.

Meanwhile, the FCC has issued an order to bar China Telecom from operating in the United States over national security concerns. The federal agency has offered the China-based telecommunications firm 60 days to discontinue its services in the country. Although the punitive move is not likely to cause significant losses to the carrier that generates the bulk of its revenue from domestic operations, it is expected to aggravate the strained Sino-US relationship as the battle for 5G supremacy heats up. The latest FCC move follows an earlier decision by the NYSE in January to delist three China-based telecom firms, namely China Mobile, China Telecom, and China Unicom, from major U.S. indices in compliance with a November 2020 executive order by President Trump over alleged ties with the state-owned military.

Regarding company-specific news, quarterly earnings and preliminary results primarily took the center stage over the past five trading days.

Excluding non-recurring items, adjusted earnings were 87 cents per share compared with 76 cents in the year-earlier quarter. Adjusted earnings for the third quarter beat the Zacks Consensus Estimate by 9 cents. Quarterly GAAP operating revenues decreased 5.7% year over year to $39,922 million, largely due to the divestment of the U.S. video business and other businesses, partially offset by higher equipment sales within the Mobility business and growth in subscription-based revenues within WarnerMedia. The top line missed the consensus mark of $40,542 million.

3.    Juniper Networks, Inc. (JNPR - Free Report) reported modest third-quarter 2021 results, wherein the bottom line matched the Zacks Consensus Estimate but the top line missed the same. Investments in customer solutions and sales organizations are enabling the company to capitalize on the solid demand across each of its end markets.

Non-GAAP net income was $152 million or 46 cents per share (in line with the company’s guidance) compared with $144.4 million or 43 cents per share in the year-ago quarter. The bottom line matched the Zacks Consensus Estimate. Quarterly total revenues increased to $1,188.8 million (slightly below the mid-point of the company’s guidance due to the negative impact of supply chain constraints) from $1,138.2 million in the prior-year quarter driven by solid demand. The top line, however, missed the consensus estimate of $1,206 million.

Non-GAAP net income was $43 million or 45 cents per share (above the high end of the company’s guidance) compared with $22.3 million or 24 cents per share in the year-ago quarter. The bottom line beat the Zacks Consensus Estimate by 6 cents. Quarterly revenues grew 13.2% year over year to $233 million (above the mid-point of the company’s guidance), driven by solid demand across its Audio and Precision Devices segments. The top line surpassed the consensus estimate of $232 million.

5.    Bandwidth Inc. (BAND - Free Report) recently issued preliminary results for third-quarter 2021. The selective preliminary metrics offer clarity regarding its business operations as it aims to navigate through an adverse revenue impact from distributed denial of service attack in September.

Management currently expects third-quarter GAAP revenues to be about $131 million, up 54% year over year, and well above prior expectations of $123.6-$124.6 million. This includes Communications Platform-as-a-Service revenues of $107.4 million (up 46% year over year) compared with earlier expectations of $106.1-$107.1 million. The higher revenue projection is primarily attributable to healthy demand trends driven by a customized networking infrastructure. The Zacks Consensus Estimate for revenues is currently pegged at $124 million. 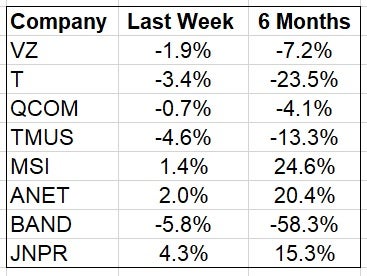 In the past five trading days, Juniper has been the best performer with its stock gaining 4.3% while Bandwidth has declined the most with its stock falling 5.8%.

Over the past six months, Motorola has been the best performer with its stock appreciating 24.6% while Bandwidth has declined the most with its stock falling 58.3%.

Over the past six months, the Zacks Telecommunications Services industry has declined 12.2% while the S&P 500 has rallied 8.7%. 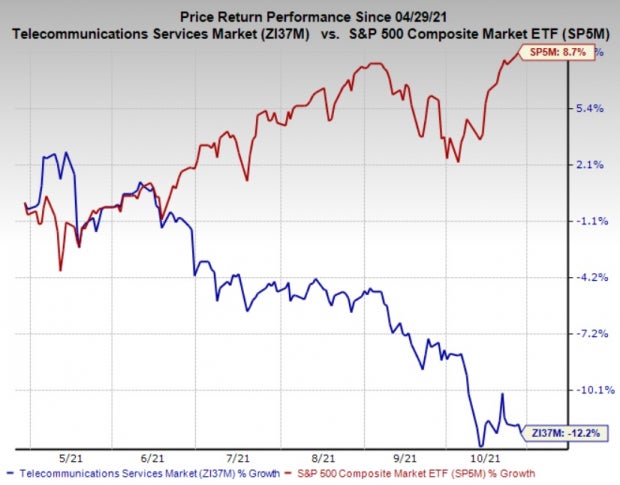 In addition to 5G deployments and product launches, all eyes will remain glued to how the administration implements key policy changes to safeguard the interests of the industry and address the bottlenecks to spur growth as the earnings season moves to the business end.