The company’s quarterly performance was affected by lower shipment volumes in the smokeable and oral tobacco categories. Nevertheless, higher pricing continued to remain an upside. The company’s wine category witnessed growth in the reported quarter. Management announced an expansion to its existing share repurchase program. It also raised the lower end of its adjusted earnings view for 2021.

Net revenues declined 4.7% year over year to $6,786 million due to lower net revenues in the smokeable segment. Revenues, after deducting excise taxes, were down 2.6% to $5,531 million. The Zacks Consensus Estimate for revenues was pegged at $5,768 million.

Smokeable Products: Net revenues in the category declined 5.4% year over year to $5,975 million due to lower shipment volumes, partially offset by higher pricing and lower promotional investments. Revenues, net of excise taxes, were down 3% year over year to $4,757 million.

Adjusted OCI in the segment dropped 2.2% to $2,761 million due to lower shipment volumes and a rise in resolution expenses, partly mitigated by higher pricing and lower promotional investments. Adjusted OCI margin increased 0.5 percentage points to 58%.

Domestic shipment volumes in the segment went down 3.8%, mainly due to retail share losses (from an increase in oral nicotine pouch sales) and trade inventory movements. The drawbacks were partially mitigated by industry growth, calendar differences and other factors. On an adjusted basis, oral tobacco products shipment volumes went down an estimated 2.5%. Total oral tobacco products’ retail share fell 2.2 percentage points to 47.8%.

Wine: Net revenues in the segment rose 12.7% year on year to $177 million due to increased pricing and improved mix. The segment’s revenues, net of excise taxes, increased 13.2% to $172 million. Reported wine shipment volumes went up 5.1% to about 5.4 million cases.

Adjusted OCI in the category went up 35% to $27 million, resulting from higher pricing as well as improved mix. Adjusted OCI margin expanded 2.5 percentage points to 15.7%.

Altria ended the quarter with cash and cash equivalents of $2,957 million, long-term debt of $27,022 million and total stockholders’ deficit of $1,265 million.

The company’s board authorized the expansion of its existing $2-billion share repurchase program to $3.5 billion. Altria expects to complete the expanded program by December 31, 2022. During the third quarter, Altria bought back 6.7 million shares for $322 million. In the first nine months of 2021, the company repurchased 20.2 million shares for $972 million. Following the company’s share expansion move, it now has shares worth approximately $2.5 billion remaining under the share repurchase program

During the quarter, the company paid out dividends worth $1.6 billion. In August, the company raised its quarterly dividend. The company currently has an annualized dividend rate of $3.60 per share, representing a dividend yield of 7.5% as of October 25, 2021. The company maintains a long-term dividend payout ratio goal of about 80% of the adjusted earnings per share. 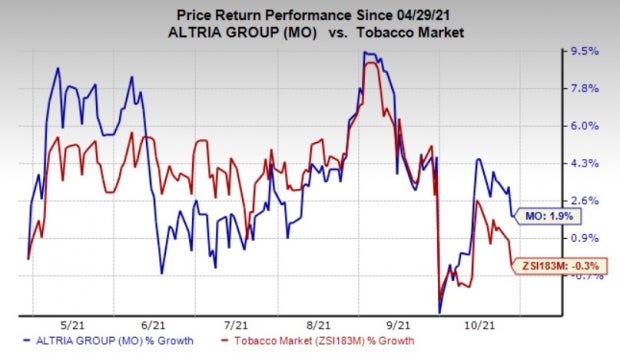 The company provided an update on the IQOS heated tobacco system patent proceedings. In September 2021, the International Trade Commission (ITC) imposed a ban on importing and issued cease-and-desist orders (CDO) on IQOS, Marlboro HeatSticks and infringing components. However, Altria disagrees with the ITC’s decision as it believes that IQOS does not infringe any of the plaintiff’s patents. The ITC’s decision is currently under a 60-day review by the Biden Administration. If the decision is not rejected post review, the CDO will take effect on Nov 29, 2021, making all IQOS and Marlboro HeatSticks products unavailable in the marketplace. Altria’s subsidiary, PM USA, is preparing to comply with the orders and is designing contingency plans. It has been in communication with Philip Morris International Inc. (PM - Free Report) regarding their domestic manufacturing plans.

Altria noted that its tobacco business has not witnessed any material disruption related to the COVID-19 pandemic. The company continues to assess the macroeconomic impacts of the pandemic on adult tobacco consumers (ATCs), such as stay-at-home trends, disposable income and buying patterns.

For 2021, the company updated adjusted earnings view in the range of $4.58-$4.62 from $4.56-$4.62. The revised bottom-line view indicates growth of 5-6% from $4.36 recorded in 2020. Management stated that the company will continue assessing the external environmental factors like ATC dynamics, unemployment rates, purchasing pattern as well as the timing and breadth of the coronavirus vaccine, among others.

We note that shares of this Zacks Rank #3 (Hold) company have gained 1.9% in the past six months compared with the industry’s decline of 0.3%.