Backed by the better-than-expected earnings results and a favorable view, shares of the company rose 3.2% in the pre-market session.

Shares of this Zacks Rank #4 (Sell) company have declined 11.8% in the past three months compared with the industry’s fall of 7.5%. 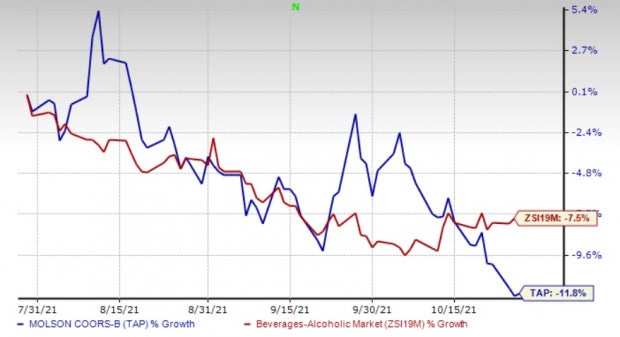 The company’s adjusted earnings of $1.75 per share grew 8% year over year and beat the Zacks Consensus Estimate of $1.55.

Net sales increased 2.5% to $2,822.7 million but missed the Zacks Consensus Estimate of $2,861 million. The lower-than-expected sales can be attributable to lower financial volume, thanks to economy brand declines and the U.S. domestic shipment timing. However, sales were aided by solid pricing in North America and Europe, and positive brand and channel mix, which led to year-over-year sales growth despite the aforementioned headwinds.

On a constant-currency (cc) basis, net sales rose 1%. Net sales per hectoliter increased 3.6% on a brand-volume basis, driven by strong net pricing, favorable brand mix linked to portfolio premiumization and a favorable channel mix due to the further reopening of on-premise.

Molson Coors’ worldwide brand volumes advanced 3.1% to 22.1 million. Financial volumes declined 3.9% to 22.9 million hectoliters primarily due to lower brand volume. Brand volume dipped 3.6%, owing to a decline in the United States, stemming from economy brands, lower Central Europe volumes and the lapping of prior-year volumes of the India business, which was disposed of in first-quarter 2021. This was partly negated by brand volume growth in Canada and Latin America due to the reopening of the on-premise channel.

Underlying (non-GAAP) EBITDA declined 9.8% year over year to $642.6 million and 10.9% on a constant-currency basis due to higher COGS resulting from inflation and mix, lower financial volume, and increased marketing spend to support brands and innovation. This more than offset sales growth, and lower general and administrative expenses.

North America: Net sales in the segment dipped 1.2% to $2,224.7 million on a reported basis and 2.1% at cc, driven by lower financial volumes. Financial volumes declined 4.8% year over year due to lower brand volume and unfavorable shipment timing in the United States. North America brand volume dropped 3.8% on a 5.2% fall in the United States, owing to the de-prioritization of non-core SKUs for the economy brands. However, brand volume improved 0.5% in Canada and 9% in Latin America due to reduced on-premise restrictions in the third quarter.

Net sales per hectoliter, on a brand volume basis, rose 2.4% at cc on a favorable brand mix and higher net pricing. On the flip side, an unfavorable geographic mix, stemming from higher license volumes in Latin America, acted as a deterrent. Underlying EBITDA fell 13.6% on a reported basis to $502.6 million and 14.3% at cc.

Europe: The segment’s net sales on a reported basis rose 19.2% to $601 million and 14.7% at cc. The uptick was due to higher net sales per hectoliter on a reported basis. Net sales per hectoliter (brand volume basis) for the segment rose 11% at cc, resulting from favorable sales mix and higher pricing, along with the lapping of the prior year’s keg returns due to the on-premise closures amid the pandemic.

The segment’s financial volumes dipped 2% and brand volumes were down 3%, owing to the increased on-premise restrictions in some Central and Eastern Europe markets as well as the lapping of the prior-year volumes of the India business, which was disposed of in first-quarter 2021. The segment’s underlying EBITDA was up 5.6% on a reported basis to $127.2 million, and increased 2.7% at cc. The increase was driven by higher gross profit, aided by favorable sales mix and higher pricing, offset by cost inflation and rising MG&A expenses due to increased marketing spend to support its brands.

Molson Coors ended the third quarter with cash and cash equivalents of $616.3 million. At the end of third-quarter 2021, the company had a total debt of $7.2 billion, resulting in net debt of $6.6 billion. In July, the company repaid 2.1% senior notes worth $1 billion, which matured on Jul 15.

In the nine months ended Sep 30, 2021, it generated cash from operating activities of $1,267.7 million, resulting in an underlying free cash flow of $933 million.

Despite the continued uncertainties related to the pandemic, management retained its view for 2021. The company is progressing with its revitalization plan, which targets long-term revenue and underlying EBITDA expansion.

Net sales are projected to grow in the mid-single digits at constant currency. Underlying EBITDA is likely to remain almost flat year over year at cc. Management estimates achieving a net debt to underlying EBITDA ratio of 3.25X by the end of 2021 and below 3.0X by 2022-end.

Underlying depreciation and amortization are projected at $800 million. The company now expects an underlying effective tax rate of 13-15% compared with 20-23% mentioned earlier. This is driven by the release of reserves for unrecognized tax positions in the third quarter. Consolidated net interest expenses are anticipated to be $270 million, plus or minus 5%.

Helen of Troy Limited (HELE - Free Report) has an expected long-term earnings growth rate of 8%. It currently has a Zacks Rank #2.