The company noted that trends across its business units and markets have been improving due to restriction easing. Though the improvement was not linear across markets or segments; the company seems to be well-positioned than the prior-year quarter.

Net consolidated income for the largest franchise bottler for The Coca-Cola Company (KO - Free Report) was Ps. 16,406 million (US$819.9 million), reflecting a significant improvement from Ps. 4,691 million (US$212.2 million) reported in the year-ago quarter. The improvement can primarily be attributed to robust income from operations across all units, higher non-operating income through dividends received from JRD and increased participation in Heineken’s (HEINY - Free Report) results.

Results also benefited from a non-cash foreign currency gain linked to FEMSA’s U.S. dollar-denominated cash position, which was impacted by the depreciation of the Mexican Peso in the quarter. This was partly offset by higher interest expenses.

Total revenues were $7,117 million (Ps. 142,443 million), which improved 12.6% year over year and 9.2% from third-quarter 2019 in the local currency. Revenues, in U.S. dollar, beat the Zacks Consensus Estimate of $6,791 million. Revenue growth was driven by gains across all business units, along with a favorable comparison with the year-ago quarter. This was partly offset by elevated restrictions in Mexico due to the third wave of COVID-19 infection. On an organic basis, total revenues rose 11.1%.

Shares of the Zacks Rank #3 (Hold) company have declined 5.2% in the past three months compared with the industry’s fall of 2.2%. 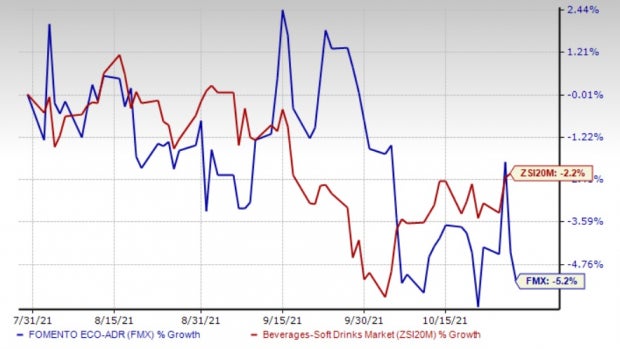 FEMSA Comercio — Proximity Division: Total revenues for the segment rose 11.7% year over year to Ps. 50,808 million (US$2,539.1 million). The increase can primarily be attributed to a 9.7% rise in same-store sales on 2.8% growth in store traffic and a 6.8% increase in average ticket. In the reported quarter, the company’s OXXO store base increased by 163 stores. Consequently, FEMSA Comercio’s Proximity division had 19,997 OXXO stores as of Sep 30, 2021. Operating income accelerated 87.6% year over year, while the operating margin expanded 370 bps to 9.1%, owing to higher operating leverage.

FEMSA Comercio — Health Division: The segment reported total revenues of Ps. 18,319 million (US$915.5 million), up 8.2% year over year. Revenues benefited from favorable trends in Mexico and Colombia operations as well as higher consumption in Chile. This was partly offset by negative currency translations. Same-store sales for drugstores increased 4.2%. On a currency-neutral basis, total revenues increased 16.4%, while same-store sales increased 16.2%. The segment had 3,540 points of sales across all regions as of Sep 30, 2021. The operating income improved 4.8% year over year, while the operating margin contracted 20 bps to 5.3%. The decline can be attributed to higher operating expenses.

Logistics and Distribution: Total revenues for the segment were Ps. 11,734 million (US$586.4 million). Revenues reflected positive demand trends across Latin America as well as recovery in most end-user segments in the United States. The segment’s operating income was Ps. 602 million (US$30.1 million), with 5.1% of operating margin.

Coca-Cola FEMSA: Total revenues for the segment advanced 3.4% year over year to Ps. 48,316 million (US$2,414.6 million). Revenues were mainly aided by improved volume, pricing initiatives and favorable price-mix effects. On a comparable basis, revenues improved 8.8%. Coca-Cola FEMSA’s operating income fell 9% and comparable operating income declined 7%. The segment’s operating margin contracted 180 bps to 13.4% on normalization of some operating expenses like marketing, labor and maintenance due to the reopening of operations and increased mobility in most markets. The company also recognized non-recurring tax effects of Ps 620 million in Brazil.