The company recorded net sales of $3,847.4 million, increasing around 84% year over year and surpassing the Zacks Consensus Estimate of $3,712.1 million. The favorable pricing environment and strong underlying demand in many of its major end markets drove the sales to record levels in the third quarter.

Shipments increased around 6% year over year in the third quarter. However, shipments declined around 5% on a sequential comparison basis, hurt by supply disruptions and labor shortages.

Demand in non-residential construction, the company’s biggest market, remained strong during the reported quarter. The company expects demand in this segment to continue to improve through the remainder of 2021 on the back of solid quoting activity, favorable customer sentiments and industry indicators. Reliance Steel also witnessed strength across semiconductors and slow improvement in the energy (oil and natural gas) market.

However, the company witnessed a slight drop in demand for the toll processing services that it provides to the automotive market as a result of the impact of global microchip shortages on production levels in certain automotive markets. Additionally, demand in commercial aerospace was impacted by seasonality, particularly in Europe.

Average prices per ton sold in the third quarter went up roughly 78% year over year to $2,862. Prices also rose around 18% on a sequential comparison basis.

The company generated cash flow from operations of $142.2 million in the third quarter.

Reliance Steel returned $174.7 million to shareholders through dividends and share buybacks during the quarter.

Going forward, Reliance Steel remains optimistic about the business environment and sees robust or recovering demand in the majority of its end markets. However, factors such as bottlenecks in metal supply, labor shortages and supply-chain disruptions impacting shipments, as witnessed in the third quarter, are expected to persist in the fourth quarter as well. The company also expects demand to be sequentially affected by normal seasonal factors including customer holiday-related shutdowns and fewer shipping days in the fourth quarter.

Reliance Steel estimates its tons sold to be down 5-8% in the fourth quarter compared with the prior quarter. Moreover, the metal prices at the beginning of the fourth quarter are higher than the average for the third quarter. Due to this upside, the company anticipates its average selling price per ton sold for the fourth quarter to go up in the range of 5-7%.

Taking into account the above-mentioned factors, the company expects adjusted earnings per share in a band of $5.05 to $5.15 for the fourth quarter.

Reliance Steel’s shares have gained 31.8% in a year compared with the industry’s 74.4% rise. 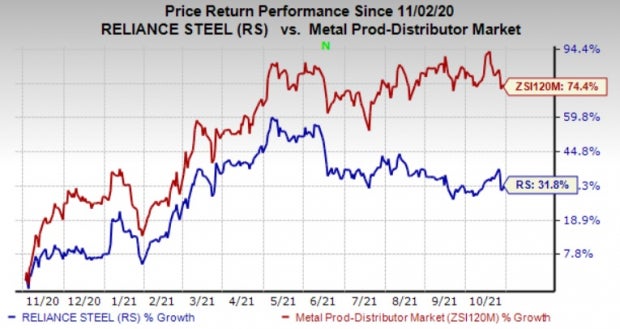 Nutrien has an expected earnings growth rate of 181.7% for the current year. The stock has also rallied around 68% over a year.

Methanex has a projected earnings growth rate of 429% for the current year. The company’s shares have shot up around 52% in a year.

Steel Dynamics has a projected earnings growth rate of 477.5% for the current year. The company’s shares have surged around 107% in a year.

Top 6 Momentum Picks for November After a Fabulous October