Top 6 Momentum Picks for November After a Fabulous October

Wall Street had a fabulous October, more than offsetting September’s market turmoil. The three major stock indexes — the Dow, the S&P 500 and the Nasdaq Composite — rallied 5.8%, 6.9% and 7.3%, respectively. In September, these three indexes plummeted 4.3%, 4.8% and 5.3%, respectively.

The October performances of U.S. stock markets were more appreciable since the month is historically known for its volatile trading pattern. The momentum is likely to continue as we are entering the holiday sales season of 2021.

First, a strong reduction of news cases of the Delta variant will pave the way for strong holiday sales. On Oct 28, the FDA approved the COVID-19 vaccine developed by Pfizer Inc. (PFE - Free Report) and BioNTech SE (BNTX - Free Report) for children of age 5 to 11. More than 28 million U.S. kids will now get the vaccine.

Second, on Oct 28, President Joe Biden announced that he has reached a deal with Senate Democrats on the outlines of a $1.75 trillion social spending and climate bill. He appealed to House Democrats to vote for the stalled $1 trillion infrastructure bill that already passed the Senate.

Third, U.S. consumers have regained confidence in economy. The Conference Board reported that the U.S. consumer confidence index climbed to 113.8 in October from 109.8 in September, beating the consensus estimate of 107.5. The index rebounded after three consecutive months of decline.

More importantly, the expectations sub-index (consumers’ outlook for income, business, and labor market conditions for the next 6 months) improved to 91.3 in October from 86.7 in September.

Fourth, the struggling U.S. labor market is gradually returning to normalcy. The weekly jobless claims stayed at the low-end of the pandemic era over the last three months. Initial jobless claims fell below 300,000 in the last three reported weeks. This is the best level since Mar 14, 2020, just before the COVID-19 outbreak in the United States.

Fifth, a series of economic data for September that was released in October, reaffirmed the solid fundamentals of the U.S. economy. U.S. manufacturing and services PMIs, retail sales, durable goods orders exceeded the consensus estimates.

Sixth, on Oct 29, the initial estimation of the Atlanta Fed forecast that the U.S. economy is expected grow 6.6% in fourth-quarter 2021 after rising 2% in the third quarter. The U.S. GDP grew 6.4% and 6.7%, in the first and second quarters of this year, respectively. Moreover, robust U.S. corporate earnings in the first, second and third quarters bolstered market participants’ confidence in U.S. equities.

At this stage, we have narrowed down our search to six large-cap (market capital > $10 billion) momentum stocks that have strong upside left for the rest of 2021. These stocks have seen positive earnings estimate revisions within the last 7 days, indicating that the market is expecting these companies to do good business this year. Each of our picks carries a Zacks Rank #1 (Strong Buy) and has a Momentum Score of A.  You can see the complete list of today’s Zacks #1 Rank stocks here.

The chart below shows the price performance of our six picks in the past month. 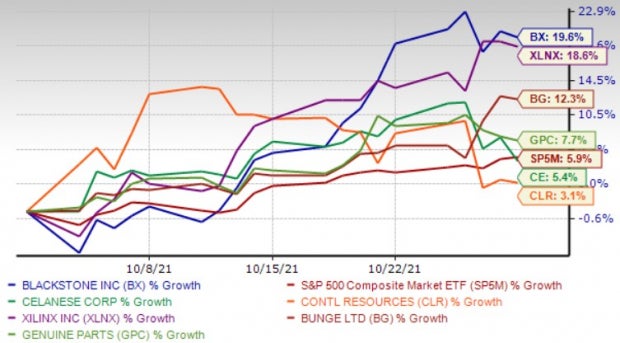 The Blackstone Group Inc. (BX - Free Report) remains well-poised to benefit from its fund-raising ability, revenue mix and inorganic expansion strategies. To provide ESG-focused investment opportunities, it inked a deal to acquire Sphera, while the buyout of DCI will further enhance its digital capabilities.

The company has an expected earnings growth rate of 63% for the current year. The Zacks Consensus Estimate for its current-year earnings improved 5.9% over the last 7 days.

Celanese Corp. (CE - Free Report) remains focused on executing its productivity programs that include the implementation of a number of cost reduction capital projects. Cost savings through productivity actions and operational improvement are likely to support the company’s bottom line in 2021.

The acquisitions of SO.F.TER., Nilit and Omni Plastics are also expected to drive results in its Engineered Materials unit this year. The Santoprene buyout also boosts its engineered solutions business. Celanese is poised to gain from expansion in emerging regions. Its efforts to lower debt also bode well.

The company has an expected earnings growth rate of more than 100% for the current year. The Zacks Consensus Estimate for its current-year earnings improved 4.5% over the last 7 days.

Continental Resources has a premier position in the Bakken area. Moreover, operations in the SCOOP and STACK plays of Oklahoma generate huge profits for the company. Its bottom line for this year is supported by increased production volumes and higher realizations of commodity prices.

The company has an expected earnings growth rate of more than 100% for the current year. The Zacks Consensus Estimate for current-year earnings improved 3% over the last 7 days.

Strong momentum for the Vitis software development platform should act as a tailwind. Additionally, the Solarflare acquisition would bring in incremental revenues in the subsequent quarters. The company has an expected earnings growth rate of 32.8% for the current year (ending March 2022). The Zacks Consensus Estimate for current-year earnings improved 10.2% over the last 7 days.

The company has an expected earnings growth rate of 25.7% for the current year. The Zacks Consensus Estimate for current-year earnings improved 17.3% over the last 7 days.

Genuine Parts Co. (GPC - Free Report) has completed significant strategic buyouts to improve product offerings and expand its geographical footprint. The acquisition of PartsPoint and Alliance Automotive Group and the possession of full ownership in Inenco have bolstered its growth.

The company has an expected earnings growth rate of 26.6% for the current year. The Zacks Consensus Estimate for its current-year earnings improved 0.6% over the last 7 days.

5 Sales Growth Stocks Worth Adding to Your Portfolio Now