Esperion Therapeutics, Inc. (ESPR - Free Report) incurred a loss per share of $2.62 per share for the third quarter of 2021, narrower than the Zacks Consensus Estimate of a loss of $2.86 per share. The company had recorded earnings of $3.07 per share in the year-ago period.

Shares of Esperion were however down 7.4% in pre-market trading on Nov 2. In fact, Esperion’s stock has lost 58.2% so far this year compared with the industry’s 11.1% decrease. 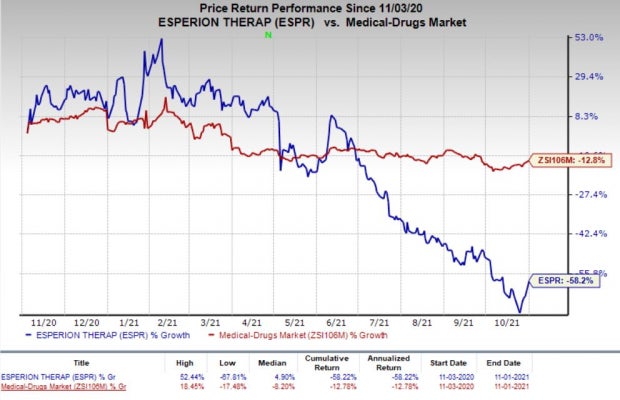 Esperion launched its first commercial drug — Nexletol — in March 2020 followed by Nexlizet in June in the United States. While Nexletol is a bempedoic acid monotherapy tablet, Nexlizet is a combination of bempedoic acid and Merck’s (MRK - Free Report) Zetia (ezetimibe) that are approved for treating elevated LDL-C (bad cholesterol).

Both these drugs received approval in Europe in April 2020. In Europe, Nexletol is available as Nilemdo and Nexlizet as Nustendi. Daiichi Sankyo, Esperion’s collaboration partner for Europe, launched the drugs in Germany in November 2020. Esperion records royalty on sales of its drugs in Europe.

Product revenues, solely from the United States, were $10.9 million in the third quarter compared with $3.3 million in the year-ago quarter and $10.3 million in the previous quarter. The company stated that prescriptions for its drugs were up 10% year over year.

Research and development (R&D) expenses decreased 28.3% from the year-ago period to $25.3 million due to lower clinical activities.

Selling, general and administrative expenses (SG&A) were down 19.5% year over year to $39.3 million.

Last month, Esperion announced a plan to align its operational and expense structure, which will help the company to deliver better growth. The company plans targeted program savings and will reduce 40% of its workforce to lower its operating expense.

The company plans to streamline its sales force, and target cardiologists and primary care physicians for the promotion of its marketed drugs. It made the decision after a systematic review and is currently planning to focus on the commercialization of its two drugs as well as on the ongoing CLEAR Outcomes study, a CVOT study, evaluating Nexletol and Nexlizet in patients who have statin intolerability.