The stock moved up 4.2% since the earnings release on Nov 2, owing to the better-than-expected results and strong earnings guidance for 2021. ICF International raised its guidance for non-GAAP earnings per share to $4.70-$4.90 from the previously expected $4.35-$4.65. The raised guidance is above the current Zacks Consensus Estimate of $4.61.

Notably, the stock has increased 50.1% in the past year compared with 9% growth of the industry it belongs to. 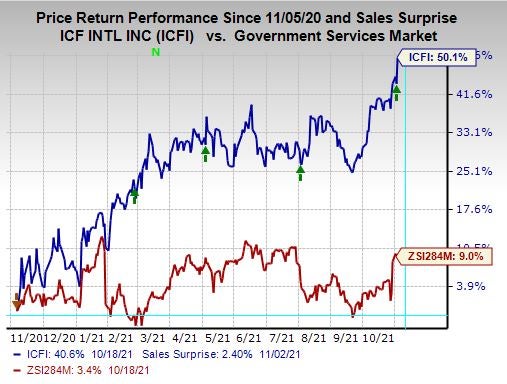 International government revenues of $32.2 million were up 59.4% year over year, contributing 8% to total revenues. This surge was driven by significant pass-through revenues.

Total backlog and funded backlog amounted to $3.1 billion and $1.7 billion at the end of the quarter, respectively. The total value of contracts awarded in the quarter came in at $604 million, for a quarterly book-to-bill ratio of 1.53.

The company generated around $58.4 million of cash from operating activities and capex was $4.8 million. ICF paid out dividends of $2.6 million in the quarter.

On Nov 2, 2021, ICF declared a quarterly cash dividend of 14 cents per share. The dividend will be paid out on Jan 12, to stockholders on record as of Dec 10.

EBITDA is expected in the high-end of the range of $145-$155 million or slightly above. ICF currently carries a Zacks Rank #3 (Hold). You can see the complete list of today’s Zacks #1 Rank (Strong Buy) stocks here.

Equifax’s (EFX - Free Report) third-quarter 2021 adjusted earnings of $1.85 per share beat the Zacks Consensus Estimate by 7.6%. The bottom line declined on a year-over-year basis. Revenues of $1.22 billion outpaced the consensus estimate by 3.6%. The top line increased 14.5% year over year on a reported basis and 14% on a local-currency basis.