The ODP Corporation (ODP - Free Report) posted third-quarter 2021 results, with the top line missing the Zacks Consensus Estimate and the bottom line surpassing the same. Both sales and earnings declined year on year.

Performance during the quarter was adversely impacted by fewer retail stores and lower traffic trends, especially in e-commerce as well as industry-wide supply chain disruptions. Demand across many product categories has been dismal owing to slower pace of back-to-office trends, thanks to the spread of the Delta variant. Nevertheless, gains from improved demand for core school supplies and certain other products related to the gradual return of companies to offices were encouraging.

The company is on track with plans to split its business operations and is making radical progress with its digital transformation strategies. It is also undertaking efforts to navigate through the challenges emerging from supply chain disturbances.

This provider of business services and supplies, products and digital workplace technology solutions posted adjusted earnings of $1.76 per share, which surpassed the Zacks Consensus Estimate of $1.49. The bottom declined 6.4% from the prior-year quarter’s levels.

The ODP Corporation’s total sales of $2,179 million missed the consensus mark of $2,249 million and declined 7% year over year. The downside was mainly caused by 160 fewer retail stores in service as well as lower traffic across the company’s retail and e-commerce channels on a year-on-year basis.

Product sales during the quarter were down 8% year on year to $1,993 million, due to reduced store count and lower demand for cleaning and PPE categories compared to last year. Sourcing-related challenges for technology products and other categories were also a drag.

Service revenues increased 3% to $186 million, backed by higher demand for managed print and fulfillment as well as copy and print services in the Business Solutions Division and Retail Division.

Per the company’s plans to sell its CompuCom Division, the segment is presented as discontinued operations beginning from the third quarter of 2021. Accordingly, the company’s operations are now presented based on the following two divisions.

Sales in the Business Solutions Division (BSD) declined 2% year over year to $1,171 million. The company witnessed an increase in sales in its enterprise contract channel, as more business and education customers began to recover from the pandemic, which was more than offset by lower sales in the e-commerce channel compared with the prior-year quarter’s levels. Higher sales in core categories were offset by reduced year-on-year demand for certain products as well as challenges related to supply chain and sourcing impacting some of the product categories. Adjacency categories, which includes cleaning and breakroom, furniture, technology as well as copy and print, contributed 44% to BSD sales that was flat year over year.

Segment operating income came in at $41 million, down from $45 million reported in the year-ago quarter. Operating margin contracted 300 basis points (bps) to 3.5%.

In the reported quarter, the Retail Division’s sales came is at $999 million, down 13% from from the prior-year quarter’s figures. Management informed that the retail segment had 160 fewer retail outlets at the end of the reported quarter compared with the prior-year quarter’s levels, due to the planned shutdown of underperforming outlets. Although back-to-school activity led to an increase in core school supplies, it was more than offset by lower sales in certain product categories including personal protective equipment (PPE). Supply chain and sourcing related challenges in certain product categories were also a drag.

The company closed seven retail stores during the third quarter, ending the same with 1,084 stores.

Segment operating income amounted to $107 million, down from $119 million in the prior-year quarter. Operating margin expanded 300 bps to 10.7%.

The retained B2B business will continue to operate under the name "The ODP Corporation". It will include the contract sales channel of the Business Solutions Division, which will be renamed ODP Business Solutions and ODP’s newly-formed B2B digital platform technology business, which will be named Varis. It will also continue to own the global sourcing operations and other sourcing, supply chain and logistics assets.

According to the spin-off plans, Office Depot, Inc., will be separated into an independent entity. It will consist of retail consumers as well as small business products and services. Distribution will be carried out through nearly 1,100 Office Depot and OfficeMax retail locations as well as the e-commerce platform, officedepot.com.

The separation is expected to be completed during the first half of 2022. Management believes that the separation is likely to improve strategic focus and boost the long-term value for all stakeholders.

The ODP Corporation has been progressing well with its digital-transformation initiatives. The company continues to integrate its leading P2P (procure-to-pay) software platform, BuyerQuest. The company is also boosting its collaboration with Microsoft and is on track to bring BuyerQuest’s value proposition to Microsoft’s Business Central customers. Apart from these, management informed that the sale proceeds for CompuCom is on track. 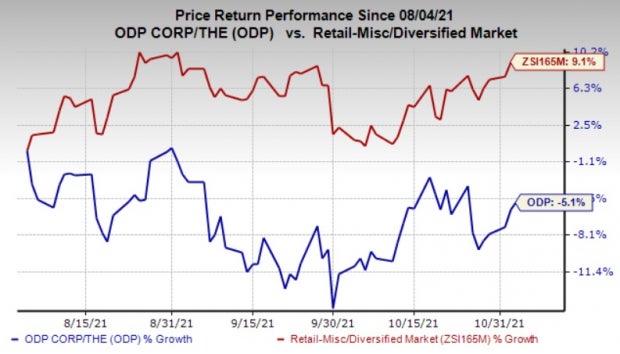 The ODP Corporation ended the quarter with total available liquidity of about $1.7 billion, comprising $753 million in cash and cash equivalents as well as $953 million of available credit under the Third Amended Credit Agreement. As of Sep 25, 2021, total debt was $353 million. Long-term debt (net of current maturities) amounted to $333 million and total shareholders’ equity were $1,862 million.

For the third quarter, cash provided by operating activities from continuing operations was $121 million. Also, management incurred capital expenditures of $19 million in the quarter.

Shares of this Zacks Rank #4 (Sell) company have declined 5.1% in the past three month against the industry’s rise of 9.1%.

Costco (COST - Free Report) , with a Zacks Rank #2 (Buy), has a long-term earnings growth rate of 8.6%. You can see the complete list of today’s Zacks #1 Rank (Strong Buy) stocks here.

The TJX Companies (TJX - Free Report) has a long-term earnings growth rate of 10.5%. It currently carries a Zacks Rank #2.