Barring one-time items, the adjusted loss was 6 cents per share, narrower than the Zacks Consensus Estimate of a loss of 10 cents.

The company generated net sales of $581.4 million in the third quarter, climbing 48% year over year from $392.9 million. The top line, however, missed the Zacks Consensus Estimate of $602.9 million. Net sales in the third quarter of 2021 increased around 10% sequentially due to higher aluminum prices and a rise in regional premiums.

Shipments of primary aluminum were 196,095 tons, down 3.4% year over year but up 3% sequentially led by the restart project at Mt. Holly and ongoing project activity at Hawesville.

At the end of the quarter, the company had cash and cash equivalents of $57.6 million, down 29.2% year over year.

The company stated that it is on track with the progress of the expansion projects at Mt. Holly and Hawesville, and expects both projects to be completed by the year-end, which will provide the much-needed additional units to the marketplace as well as additional LME and regional premium pricing exposure. Also, it has started the construction of a new 150,000 ton low-carbon billet cast-house at Grundartangi. The completion of the 2-year project promises to cast over 80% of Grundartangi’s production as value-added products, further strengthening the world-class asset. The billets and other value-added products at Grundartangi will continue to be produced using 100% renewable energy, thereby expanding the company’s Natur-Al line of low-carbon products and bringing low-carbon billets to the European marketplace.

The company also noted that global energy shortages and China’s de-carbonization policies have led to production cuts in China and Europe, leading the global aluminum market into deficit and taking down aluminum inventories to multi-year lows.

Century Aluminum’s shares have risen 83.6% over the past year, outperforming the 26.7% rise of the industry. 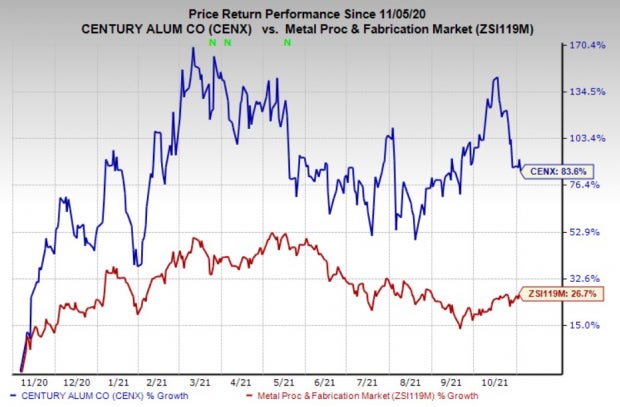 A.O. Smith has a projected earnings growth rate of 35.2% for the current year. The company’s shares have grown 44.6% over the past year.

Alcoa has a projected earnings growth rate of 690.5% for the current year. The company’s shares have shot up 230% over the past year.

Brady has a projected earnings growth rate of 21.1% for the current year. The company’s shares have risen 34.4% over the past year.