The top line of this integrated media and entertainment company gained from the return to live event touring and strong ticket demand. However, lower network revenues were a drag. Higher television and event-related production expenses put pressure on operating profits.

The company’s performance highlights its strong brand recognition. Management expects that even with just one large-scale international event due to the pandemic-led situation, the company will exceed its previous financial guidance. The company is expected to gain from overall strength in each of its business lines. It is well-positioned to maximize the content value and boost long-term shareholder value.

This Stamford, CT-based company reported third-quarter adjusted earnings of 52 cents a share that surpassed the Zacks Consensus Estimate of 34 cents. The quarterly earnings exhibited a decline of nearly 8.8% from 57 cents a share reported in the prior-year quarter.

WWE’s net revenues of $255.8 million missed the Zacks Consensus Estimate of $264.6 million. The top line rose 15% year over year, mainly driven by higher ticket sales. Venue merchandise sales, resulting from the return to live-ticketed events like SummerSlam, as well as higher core content rights fees from the distribution of Raw and SmackDown contributed to the top line. The upsides were partially offset by lower network revenues, due to the timing of the recognition of content license fees associated with the delivery of WWE Network content to Peacock.

A Look Into Margins

The company’s operating income came in at $64 million, up 1% year on year driven by growth in revenues. The absence of pandemic-related severance expenses compared with last-year levels, were also an upside. The benefits were primarily offset by higher television and event-related production expenses related to the company’s return to live event touring in July.

The company’s operating income margin came in at 25%, which fell 360 basis points (bps) from 28.6% in the year-ago quarter. The downside was due to higher production expenses.

Adjusted OIBDA came in at $77.9 million, down 8% year on year. Adjusted OIBDA margin declined 750 bps year on year to 30.5%. We note that the company measures adjusted OIBDA as operating income, which excludes depreciation and amortization, stock-based compensation, certain impairment charges and other non-recurring material items.

Media Division: Revenues in the Media division inched up 1% to $202.7 million, owing to the contractual escalation of core content rights fees from the distribution of the company’s flagship programs, Raw and SmackDown. The uptick was partly offset by lower network revenue.

Digital video views during the quarter were up 39% to 12.8 billion, while hours consumed were up 20% to 394 million across digital and social platforms.

Notably, revenues from core content rights fees increased 6.7% to $141.3 million. Network revenues (including pay-per-view) were down 9.8% to reach $43.1 million. Advertising and sponsorship revenues went down 11% to $16.1 million. Other media revenues declined 18.5% to $2.2 million during the quarter.

Live Events: Revenues from Live Events came in at $28 million, up significantly from $0.7 million in the year-ago quarter. The upside resulted from higher ticket sales as the company returned to staging live ticketed events. It held a record-breaking, sold-out SummerSlam event, with more than 51,000 fans. The company conducted weekly live events as well as a live-ticketed SummerSlam event for the first time since the onset of the pandemic. It held 42 ticketed live events in the reported quarter, consisting of 38 events in North America and 4 events in the international markets.

Consumer Products Division: The segment’s revenues were $25.1 million, up 26% year on year. The segment gained from higher sales of merchandise at the company’s live-event venues, including a successful SummerSlam event, in the quarter.

WWE ended the quarter with cash and cash equivalents of $271 million, net short-term investments of $177.7 million, long-term debt of $21.4 million and stockholders’ equity of $372.8 million.

For the first nine months of 2021, the company incurred capital expenditures of $24 million, related to investments to support the company’s technology infrastructure and the construction of its new headquarters. Such investments are likely to continue in the fourth quarter as well. For full-year 2021, capital expenditures are expected in a range of $60-$75 million compared with the earlier view of $85-$105 million. The revised range incorporates the potential for supply chain disruption and associated timing changes in spending. 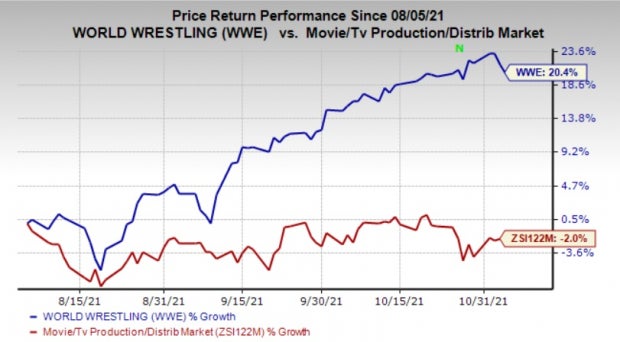 Management raised its adjusted OIBDA expectations for the year. It now envisions adjusted OIBDA in the range of $305-$315 million compared with the earlier expectation of $270-$305 million. For the fourth quarter, it expects adjusted OIBDA of $75-$85 million, which suggests an increase from $51.2 million in the year-ago quarter. The projected growth reflects on the impact of staging one large-scale international event, which the company was unable to execute a year ago. It is expected to gain from contractual increases in media rights as well as higher revenues and profits from the return to live events. These upsides are likely to be partially countered by an increase in operating expenses, including costs to support content creation.

This Zacks Rank #3 (Hold) stock has gained 20.4% in the past three months against the industry’s decline of 2%.