Logistics issues, including shortages of shipping containers and global port congestions, higher input costs, and freight inefficiencies, hurt the gross and operating margins in the third quarter. The company could not fully meet the increasing consumer demand in the United States and EMEA in the third quarter due to the shortages in aluminum cans and delays in procuring certain ingredients.

Shares of this Zacks Rank #3 (Hold) company have declined 9.5% in the past three months compared with the industry’s 0.4% fall. 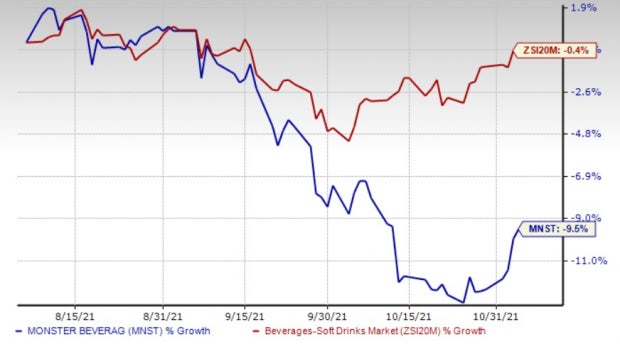 Monster Beverage’s earnings of 63 cents per share declined 3.5% year over year and missed the Zacks Consensus Estimate of 65 cents. The bottom line was impacted by inflationary operational costs for aluminum cans, shipping, freight and other inputs. The company is working to mitigate these costs through measures like reductions in promotions and other pricing actions in the United States and EMEA.

Net sales to customers outside the United States rose 18.7% to $527.4 million, representing about 37% of net sales.

Other: Net sales in the segment, which includes some products of American Fruits & Flavors sold to independent third-parties (AFF Third-Party Products), declined 26.7% year over year to $6.3 million.

Apart from this, the company saw elevated ingredient and other input costs, including shipping and freight, labor, trucking, fuel, co-packing fees, secondary packaging materials, and increased outbound freight costs, which led to increased costs of sales and higher operating costs in the third quarter.

The company also experienced incremental supply-chain challenges related to freight inefficiencies, trucking availability, shortages of shipping containers, port of entry congestion, insufficient co-packing capacity, and delays in receiving certain ingredients in the United States and EMEA. This led to product shortages in these regions amid the strong demand.

Operating income of $444.5 million grew 3.1% year over year. However, the operating margin contracted 530 bps to 31.5% for the reported quarter.

In the reported quarter, the company did not buy back any shares. As of Nov 4, 2021, it had $441.5 million remaining under the previously authorized share repurchase plan.

The Duckhorn Portfolio (NAPA - Free Report) currently has a long-term earnings growth rate of 9.4% and a Zacks Rank #2 (Buy).

Things to Note Ahead of Spectrum Brands' (SPB) Q4 Earnings