Webster Financial Corporation (WBS - Free Report) remains well-positioned for organic growth, supported by a rise in loan and deposit balances. Also, improving margins are a tailwind. However, the company is currently facing a continued rise in its operating expenses. Also, high debt burden and lack of loan diversification are major concerns.

It currently carries a Zacks Rank #3 (Hold). Shares of Webster Financial have gained 6.1% compared with the industry’s rise of 8.3% over the past six months. 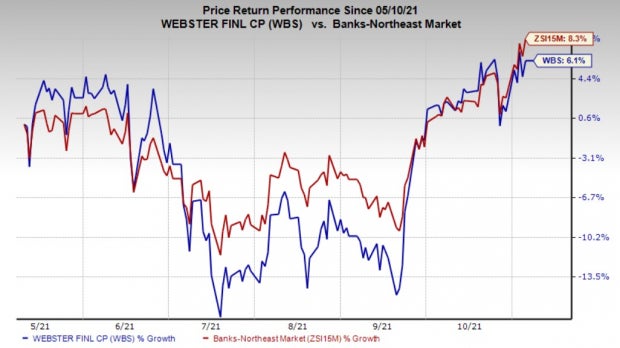 Webster Financial has been witnessing steady revenue growth as well as loans and deposit balance. Net interest income and non-interest income saw a compound annual growth rate (CAGR of 5.5% and 2%, respectively, over the last five years (2016-2020). During the first nine months of 2021, NII declined due to lower rates while non-interest income climbed slightly. Both are likely to increase on the gradual improvement in economy. Additionally, per management, the company’s loan pipeline (across all business lines) going into the fourth quarter this year is one of the strongest witnessed in the last several years.

With the gradually modifying interest-rate environment, Webster Financial’s margin pressure has been easing. In fact, after witnessing a persistent decline for years, in 2016, 2017 and 2018, the company recorded a rise in the net interest margin, reflecting an improvement in the yield on earnings assets. Though the company’s margin declined in 2019, 2020 and during the first nine months of 2021 on low interest rates, the same is expected to get support from the growing loan balances in the coming quarters.

However, mounting operating expenses have been hurting Webster Financial’s bottom-line growth for a while. The same has witnessed a CAGR of 5.1% over the past five years (2016-2020) with the trend continuing in the first nine months of 2021. The company’s expenses are likely to keep increasing on account of the initiative to expand the HSA Bank segment and transform Retail Banking.

As of Sep 30, 2021, the company held a debt level of $1.33 billion, and cash and due from banks of $161.4 million. Both have been volatile for the past few quarters. Although the current times-interest-earned ratio of 18.4 reflects an improving trend, Webster Financial’s unsound liquidity position makes it more likely to default interest and debt repayments if the economic situation worsens.

Earnings estimates for CF Bankshares Inc. (CFBK - Free Report) have moved 2.9% north over the past 30 days for the ongoing year. Shares of the company have gained 12.5% over the past six months. It sports a Zacks Rank #1 (Strong Buy) at present. You can see the complete list of today’s Zacks #1 Rank stocks here.

Earnings estimates for CrossFirst Bankshares (CFB - Free Report) have moved 12.5% north over the past 30 days for the ongoing year. The stock have rallied 5.6% over the past six months. It sports a Zacks Rank of 1 at present.

Bank of Hawaii Corporation’s (BOH - Free Report) 2021 earnings estimates have been revised 4.4% upward over the past 30 days. Shares of this currently Zacks Rank #2 (Buy) company have lost 32.3% over the past six months.

Factors to Consider as Sysco (SYY) Gears Up for Q1 Earnings