HSBC Holdings plc (HSBC - Free Report) , which has continuously been making efforts to expand its presence in the growing Asia markets, is already ahead of its hiring targets for the China retail wealth management business. Thus, now, the bank is contemplating re-entering the private banking business in India.

As part of a group strategy, HSBC exited India’s private banking business in 2015. However, now that the country is experiencing a surge in the number of super-rich, the bank is exploring options of re-entering the market.

Nuno Matos, the CEO of HSBC’s Wealth and Personal Banking division, stated, “We want to bank mass affluent and high net worth customers. At this moment, the two major pillars we are expanding in India are insurance and asset management. On the private banking side, we are not there yet and that's something that demands a strategic decision this year.”

Matos added, “On the private banking side, we are now in clear expansion mode.”

Presently, HSBC has been catering to the ultra-rich in India from its global hubs in Singapore, London and the Middle East.

Notably, HSBC, which already holds a dominant position in the Asia markets, has been aiming to become the region’s top wealth manager by 2025.

This February, the bank announced that it is on an expansion spree and it plans to hire 5,000 wealth planners in Asia over the next five years. Along with this, it announced plans of injecting $3.5 billion worth of capital in the region, of which approximately two-thirds will be used to bolster the bank’s distribution competencies via new hires and technology improvements.

Further, HSBC stated plans of shifting capital from the underperforming businesses in Europe and the United States to invest $6 billion in Asia over five years. The capital will mostly cater to amplify its wealth management business since management intends to target wealthy clients in mainland China, Hong Kong, Singapore and other parts of the region.

As part of its efforts to expand footprint in mainland China, last year, HSBC initiated a digital-first, hybrid financial management platform — HSBC Pinnacle — in the region. It hired 200 wealth managers in Shanghai, Hangzhou and Shenzen in 2020. It expects to have 700 personal wealth planners by 2021 end, up from 550 mentioned earlier.

Matos also said, “We are the leading international bank in China, so we want to squeeze that opportunity.”

Over the past year, shares of HSBC have gained 14.7% compared with the industry’s growth of 27.6%. 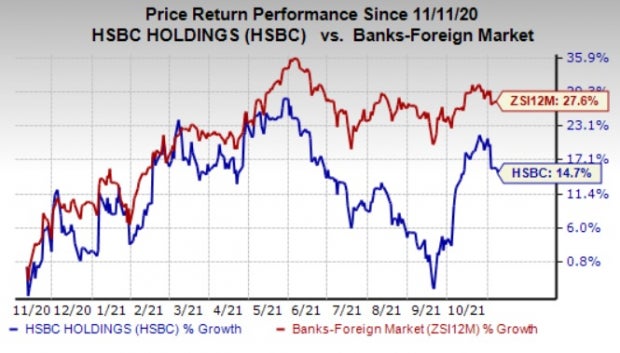