Quarterly performance was affected by tough year-over-year comparisons, thanks to elevated demand conditions stemming from the pandemic in the prior-year quarter. Divestitures and brand discontinuations were other headwinds. Management highlighted that the company’s first-quarter performance continued to be affected by industry-wide inflation and labor headwinds.

Despite the challenges, Hain Celestial will continue to focus on boosting its strength as a global healthy food and beverage company. The company is confident regarding its business growth momentum in the long run. That said, management reaffirmed its guidance for fiscal 2022.

Shares of this organic and natural products company increased 4.7% during the trading session on Nov 9, following the quarterly results. This Zacks Rank #2 (buy) company’s shares have increased 15.6% in the past three months compared with the industry’s rise of 0.9%. 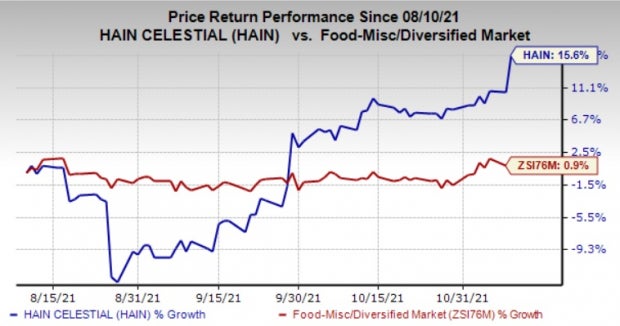 Hain Celestial posted adjusted earnings of 25 cents a share, which came ahead of the Zacks Consensus Estimate of 24 cents. The bottom line declined 7.4% from 27 cents reported in the prior-year quarter.

Net sales came in at $454.9 million that surpassed the consensus mark of $443.7 million. The top line declined 9% year on year on a reported basis and 11% on a constant-currency (cc) basis. Upon adjusting for foreign exchange, divestitures and discontinued brands, net sales were flat year on year. Overlapping of pandemic-led volume surge witnessed in the prior-year quarter affected the top line. Divestitures and brand discontinuations hurt sales by 11%. Currency acted as a tailwind and benefitted sales by 2%.

Net sales in the North America segment fell 5% year over year to $265.5 million. On adjusting for currency movements, divestitures and discontinued brands, net sales declined 1%. The downside was caused by the lapping of elevated at-home food consumption and strong hand sanitizer sales in the prior-year quarter due to the pandemic.

The company ended the reported quarter with cash and cash equivalents of $29 million, long-term debt (excluding current portion) of $345.4 million and total shareholders’ equity of $1,348.8 million.

In August 2021, the company’s board approved an additional share repurchase plan worth nearly $300 million. The new buyback plan was commenced in the same month, after the company completed the 2017 authorization.

For fiscal 2022, the company continues to expect low single digits growth in adjusted net sales, year on year. This includes foreign exchange related benefits worth 20 bps as well as negative impact of 600 bps from divestitures. The company anticipates modest expansion in adjusted gross margin in fiscal 2022. Adjusted EBITDA is expected to grow in the mid- to high-single-digit range, year on year.

As part of the company’s full-year outlook and persistent pressures from industry-wide supply chain headwinds, the company updated its cost of goods inflation to be north of 6%. Management plans to undertake pricing actions to mitigate the impacts of inflation over time.

The Chefs' Warehouse, Inc. (CHEF - Free Report) , with a Zacks Rank #2 (Buy), delivered an earnings surprise of 279% in the last four quarters, on average.