1. International travel demand is also recovering following the U.S. government's announcement to reopen international borders. Per the new policy, foreign nationals (from 33 countries) will have to be fully vaccinated when they fly to the United States. Evidently, management of Delta confirmed that a 450% surge in international bookings has been witnessed in six weeks’ time since the above announcement. Flight DL106 from Sao Paulo to Atlanta was Delta’s first international flight to touch down in the United States on Nov 8, under the new set of rules. To cater to the anticipated demand swell, Delta boosted its network this winter from the key European cities including London-Boston, Detroit and New York-JFK, Amsterdam-Boston, Dublin-New York-JFK, Frankfurt-New York-JFK and Munich-Atlanta.

3. Ryanair’s October 2021 traffic surged more than 100% year over year to 11.3 million as air-travel demand continues to recover in the European Union. Load factor (percentage of seats filled with passengers) in the period was 84% compared with 73% in October 2020. The airline operated more than 71,500 flights last month. Ryanair’s October traffic also shows a sequential improvement of 6.6%.

We remind investors that Ryanair’s top line had improved substantially in second-quarter fiscal 2022 owing to an increase in traffic as reported in the previous week’s write up.

4. Owing to the improvement in air-travel demand in Brazil, Azul’s domestic traffic for the month of October skyrocketed 66% from the year-ago period’s number. Capacity expanded 62.4% year over year in response to higher demand. With capacity growth outweighing the traffic increase, load factor (percentage of seats filled by passengers) moved northward in the month by 1.8 percentage points (p.p.) to 82.5%. Traffic and capacity (domestic) increased 6.1% and 8%, respectively, from the October 2019 (pre-pandemic levels) numbers. On the international front, traffic and capacity surged 20.4% and 3.1%, respectively, in October 2021 on a year-over-year basis. Consequently, load factor increased 11 p.p. to 76.3%.

5. Southwest Airlines, currently carrying a Zacks Rank #3 (Hold), signed an offtake agreement spanning 15 years with Velocys for 619 million gallons of sustainable aviation fuel (SAF), to be delivered over a period of 10 years. After being blended with conventional jet fuel, the SAF could produce the equivalent of 575 million gallons of net-zero fuel, thereby avoiding 6.5 million metric tons of carbon dioxide for more than 15 years. This Dallas-based carrier intends to start purchasing SAF from Velocys beginning 2026. Additionally, as part of the offtake agreement, the companies formed a long-term strategic relationship, under which Southwest Airlines is eligible to purchase significant volumes of SAF from the future Velocys facilities.  You can see the complete list of today’s Zacks #1 Rank (Strong Buy) stocks here. 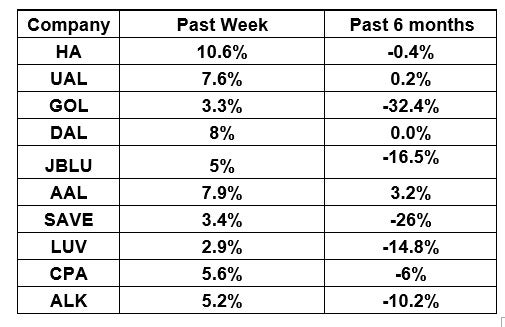 Investors will look forward to the third-quarter 2021 earnings report of Copa Holdings (CPA - Free Report) , scheduled to be released on Nov 17.