U.S. telecom stocks traded relatively flat on average over the past week as the initial gains driven by the passage of the $1.2 trillion infrastructure bill in the House were offset by concerns regarding its implementation across various states. The multi-billion infrastructure bill was passed by a majority vote of 228-206 with several intra-party votes after months of painstaking negotiations hit a stumbling block as its progress was intertwined with that of the larger $3.5 trillion budget reconciliation bill. The social spending reconciliation package was slashed from $3.5 trillion to $1.75 trillion by abandoning some key provisions within it in order to broker a deal between the warring factions of the party and pass it in unison with the infrastructure bill. However, no consensus was reached and the voting on the reconciliation package was deferred to a later date.

The infrastructure bill includes a $65 billion provision to significantly expand broadband access to Americans, as the administration aims to fortify its technological prowess to thwart the dominance of countries like China. The plan envisions reaching the underserved areas of the country and prioritizing support for broadband networks affiliated with local governments, nonprofit organizations, and cooperatives to encourage strong competition with privately-owned companies. The majority of the funds (about $42.45 billion) will be overseen by the Commerce Department and the National Telecommunications and Information Administration that is responsible for making grants to states. The FCC will receive about $14.2 billion to establish an Affordable Connectivity Program – an extension and revision of the Emergency Broadband Benefit that provides $30 monthly broadband subsidies for eligible households. The plan has also earmarked funds for the tribal areas that lack access to high-speed Internet. It is likely to lower the prices for Internet services by requiring funding recipients to offer a low-cost affordable plan and encourage price transparency.

Meanwhile, President Biden continued his hard stance against Beijing and extended a ban initiated by his predecessor that bars U.S. entities to invest in China-based firms that have alleged ties with the state military. This follows an earlier directive to bar China Telecom from operating in the United States over national security concerns and a successful passage of the Secure Equipment Act that empowers the FCC to prevent the use of any telecommunications equipment manufactured by China-backed entities in the domestic markets. The bill extended the purview of FCC control to private companies and would not only deter it from approving new requests but also revoke prior equipment approval on perceived risks to national security interests.

1.     Qualcomm Incorporated (QCOM - Free Report) reported solid fourth-quarter fiscal 2021 results with record non-GAAP earnings and revenues, driven by the ramp-up in 5G-enabled chips and a surge in demand for essential products and services that are the building blocks for digital transformation in the cloud economy. Both the bottom line and the top line increased year over year and surpassed the respective Zacks Consensus Estimate, backed by the strength of the business model, revenue diversification, and the ability to respond proactively to the evolving market scenario.

Quarterly non-GAAP net income for Qualcomm came in at $2,916 million or $2.55 per share compared with $1,669 million or $1.45 per share in the year-ago quarter. Undeterred by the supply chain adversities, the non-GAAP earnings per share were largely driven by higher revenues across the board. The bottom line exceeded management’s guidance and beat the Zacks Consensus Estimate by 29 cents. Non-GAAP revenues in the reported quarter were $9,321 million compared with $6,502 million in the year-earlier quarter. The figure beat the consensus mark of $8,877 million, driven by 5G strength, high-performing core chipsets, and new RF front-end content.

Excluding non-recurring items, non-GAAP earnings in the quarter were $2.35 per share compared with $1.95 in the year-ago quarter. The bottom line beat the Zacks Consensus Estimate by 22 cents. Quarterly net sales were $2,107 million, up 12.8% year over year due to increased demand across the globe driven by the strength of its business model and the value of its mission-critical integrated ecosystem. Motorola witnessed double-digit growth in both segments with strong demand for video security, command center software and land mobile radio services. Demand for professional and commercial radio also witnessed a pickup. The top line exceeded the consensus estimate of $2,060 million.

Quarterly non-GAAP net income was $132.8 million or $2.12 per share compared with $157.1 million or $2.47 per share in the year-ago quarter. The bottom line missed the Zacks Consensus Estimate by 69 cents. Quarterly revenues for Ubiquiti were down 3.1% year over year to $458.9 million, due to lower sales of Service Provider Technology as supply chain turmoil led to a shortage of essential components and increased logistic delays, affecting the production and delivery of products. However, total revenues were partially offset by higher sales of Enterprise Technology products, primarily driven by portfolio expansion. The top line lagged the consensus estimate of $519 million.

Net income in the September quarter was $34 million or 38 cents per share compared with $85 million or 97 cents per share in the prior-year quarter. The decline was due to lower operating income, and higher interest and income tax expenses. The bottom line missed the Zacks Consensus Estimate by 3 cents. Quarterly total operating revenues for USM slipped 1.1% year over year to $1,016 million due to lower equipment sales. The top line missed the consensus estimate of $1,045 million.

Adjusted earnings in the reported quarter were 83 cents per share, which topped the Zacks Consensus Estimate of 38 cents, delivering a surprise of 118.4%. Total revenues for InterDigital increased to $143.5 million from $87.5 million in the prior-year quarter. The 64% surge in revenues was largely driven by additional revenues from 10 new patent license agreements signed in the last 12 months, including an agreement with a top 10 global TV manufacturer signed in the reported quarter. The top line surpassed the consensus estimate of $120 million. 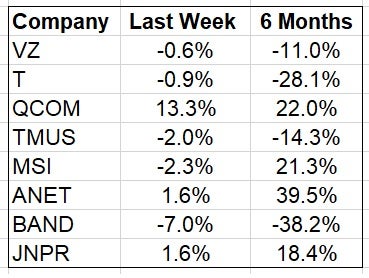 In the past five trading days, Qualcomm has been the best performer with its stock gaining 13.3% while Bandwidth has declined the most with its stock falling 7%.

Over the past six months, Arista has been the best performer with its stock appreciating 39.5% while Bandwidth has declined the most with its stock falling 38.2%.

Over the past six months, the Zacks Telecommunications Services industry has declined 12.2% while the S&P 500 has rallied 15.9%. 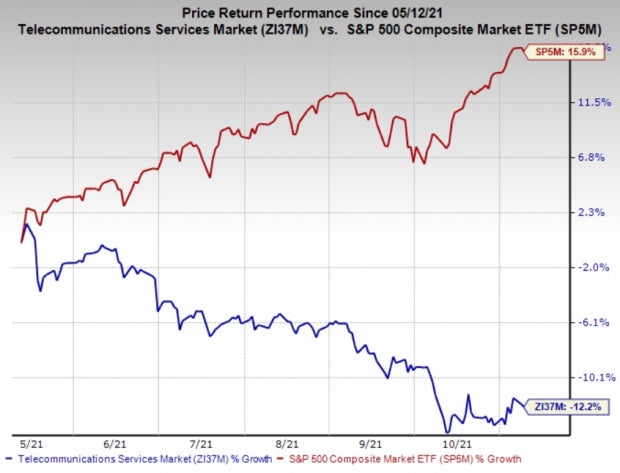