The Walt Disney (DIS - Free Report) reported fourth-quarter fiscal 2021 adjusted earnings of 37 cents per share, which compares favorably with the loss of 20 cents per share reported in the year-ago quarter.

However, the bottom line missed the Zacks Consensus Estimate by 27.4%.

Revenues were $18.53 billion, which increased 26% from the prior-year quarter. This was driven by strong performances delivered by Disney Media and Entertainment Distribution, and Disney Parks, Experiences and Products.

However, the top line lagged the Zacks Consensus Estimate of $18.85 billion.

Notably, Disney has lost 3.7% on a year-to-date basis compared with the industry’s decline of 37.5%. 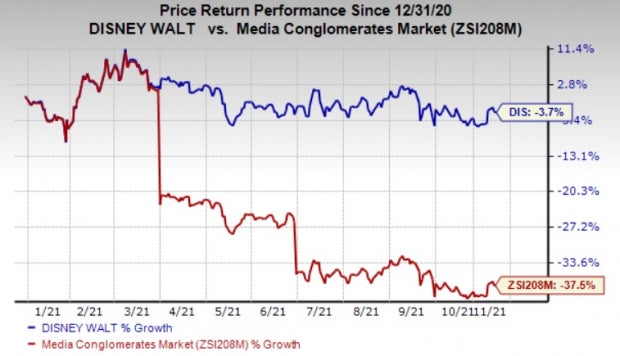 Media and Entertainment Distribution (70.6% of revenues): Revenues from the segment climbed 9% year over year to $13.08 billion.

Direct-to-Consumer revenues rose 38% year over year to $4.56 billion, driven by solid growth in the paid subscriber base of Disney+, ESPN+ and Hulu.

Content Sales/Licensing and Other revenues rose 9% year over year to $2.05 billion.

Revenues from Linear Networks decreased 4% year over year to $6.69 billion. This was due to sluggishness among domestic as well as international channels.

Parks, Experiences and Products (29.4% of revenues): Revenues from the segment surged 99% year over year to $5.45 billion.

Growth in these revenues was primarily attributed to the reopening of the company's parks and resorts for the entire quarter.

Revenues from Consumer Products decreased 3% year over year to $1.28 billion. This was due to low royalties earned from the game titles — Marvel's Avengers and Twisted Wonderland.

ESPN+ had 17.1 million paid subscribers at the end of the fiscal fourth quarter, up 66% year over year.

Hulu ended the quarter with 43.8 million paid subscribers, up 20% year over year.

The average monthly revenue per paid subscriber for ESPN+ increased 4% year over year to $4.74 due to increased retail pricing.

The average monthly revenue per paid subscriber for Disney+ was $4.12, down 9% year over year due to a higher mix of Disney+ Hotstar subscribers in the current quarter than the prior-year quarter.

The average monthly revenue per paid subscriber for Disney's Hulu SVOD-only service increased 1% year over year to $12.75. This was driven by a surge in per-subscriber premium add-on and advertising revenues, along with a lower mix of wholesale subscribers.

Costs & expenses increased 18.3% year over year to $17.9 billion in the reported quarter.

Content Sales/Licensing and Other operating loss was $65 million against the operating income of $86 million in the prior-year quarter.

Parks, Experiences and Products' operating income was $640 million against the year-ago quarter's operating loss of $945 million.

The company intends to expand its local content portfolio in Asia, India, Europe, and Latin America in fiscal 2022.

Disney+ net additions are expected to be higher in the second half of fiscal 2022 from the first half.

The company expects to incur elevated costs in fiscal 2022 due to expenses associated with new projects such as Star Wars: Galaxy's Edge, Avengers Campus, and the Epcot expansion, and cruise ship expansion.