Barring one-time items, earnings were $4.27 a share, topping the Zacks Consensus Estimate of $4.17. The steel giant benefited from a strong pricing environment in the third quarter that led to the highest net income and lowest net debt since 2008.

Total sales increased around 52% year over year to $20,229 million in the quarter. However, the figure missed the Zacks Consensus Estimate of $22,439.5 million. Sales were driven by a significant rise in average steel selling prices as well as higher iron ore prices.

At the end of the third quarter, ArcelorMittal had cash and cash equivalents of around $4.4 billion, down around 33% year over year. The company’s long-term debt was $6.5 billion, down roughly 32% on a year-over-year basis.

Factoring in softening real demand in China, ArcelorMittal now envisions a modest contraction in apparent steel demand in China in 2021. The company also expects that the impact on ex-China steel markets will be limited as strict production constraints are likely to lead to lower Chinese net exports in the second half of 2021 as compared to the first half.

Shares of ArcelorMittal have surged 101.2% in a year compared with a 63.2% rise of the industry. 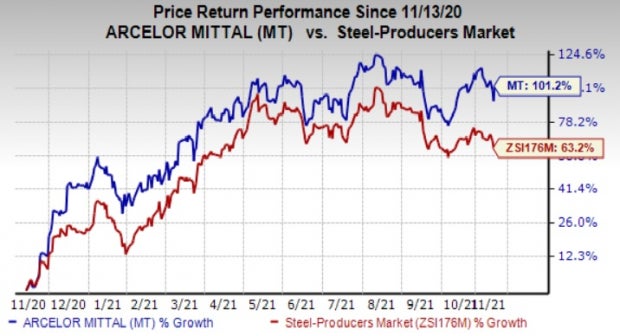 Nutrien has an expected earnings growth rate of 212.2% for the current year. The Zacks Consensus Estimate for current-year earnings has been revised 13.5% upward over the last 60 days.

Nutrien beat the Zacks Consensus Estimate for earnings in three of the last four quarters while missing once. It has a trailing four-quarter earnings surprise of roughly 73.5%, on average. NTR has gained around 62% in a year.

Steel Dynamics beat the Zacks Consensus Estimate for earnings in each of the trailing four quarters, the average being 5.1%. STLD has rallied around 91% in a year.

Dow beat the Zacks Consensus Estimate for earnings in each of the trailing four quarters, the average being 14.1%. The stock has gained around 15% in a year.

NVIDIA (NVDA) to Report Q3 Earnings: What's in the Offing?