Revenues, in the reported quarter, were driven by strategic focus on global expansion in the major row crops. MBII also saw higher sales of biological fungicides in the quarter notwithstanding the drought conditions in specialty markets in the United States.

Gross margin for the quarter was 61.4%, an improvement from 56.7% recorded a year ago. Operating expenses were essentially flat year over year at $10.5 million.

Marrone Bio ended the quarter with cash and cash equivalents of around $15 million, a roughly 68% year-over-year increase. Long-term debt was around $11.2 million, down around 1% year over year.

Net cash used in operations was roughly $6.6 million for the nine months of 2021, compared with $8.6 million of cash used for the same period a year ago.

Marrone Bio said that it now expects revenue growth in the low double-digit to mid-teens range for 2021 factoring in the uncertainties in the agricultural markets. MBII continues to expect its product mix to deliver annual gross margins in the upper 50% range. It also sees operating expenses to remain in line with 2020, plus inflation. 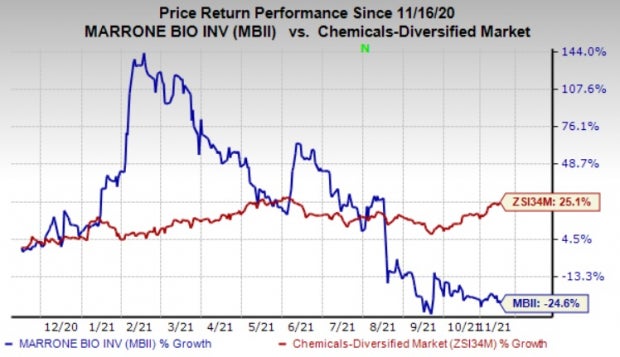 Nutrien has an expected earnings growth rate of 212.2% for the current year. The Zacks Consensus Estimate for NTR's current-year earnings has been revised 13.5% upward over the last 60 days.

Nutrien beat the Zacks Consensus Estimate for earnings in three of the last four quarters while missing once. It has a trailing four-quarter earnings surprise of roughly 73.5%, on average. NTR has gained around 58% in a year.

Steel Dynamics beat the Zacks Consensus Estimate for earnings in each of the trailing four quarters, the average being 5.1%. STLD has rallied around 79% in a year.

Univar beat the Zacks Consensus Estimate for earnings in each of the trailing four quarters, the average being 24.1%. UNVR has gained around 58% in a year.