The to-be-acquired assets involve Calgary-based oil and gas explorer Storm's holdings in the liquid-rich Montney area of northeast British Columbia. Storm currently produces 136 million cubic feet a day of natural gas and 5,600 barrels a day of natural gas liquids in the area. Per the terms of the agreement, Canadian Natural will also assume Storm's total debt of about C$186 million.

Storm's properties and production are within Canadian Natural's major activity areas. With this agreement, CNQ will expand its existing footprint in the Montney natural gas formation in northern Alberta and British Columbia.

In August 2020, Canadian Natural entered a similar agreement to acquire Painted Pony Energy, another producer in the Montney area, to expand its Western Canada acreage. CNQ also assumed about C$350 million of Painted Pony's debt. Notably, the transaction allowed CNQ to insulate against natural gas costs in its oil-sand operations as natural gas prices came under pressure from reduced consumption amid the pandemic.

However, companies are withstanding their desire to grow by drilling additional wells despite rising commodity prices. Major companies, including Canadian Natural, are considering acquisitions to some extent as investors don't want them to drill wells and bring large fuel volumes to production.

The latest acquisition offers production and infrastructure that complements Canadian Natural's existing assets in the area. The areas will provide an opportunity for synergies within CNQ's current diversified portfolio. Notably, the deal is expected to complete in December, subject to normal closing conditions.

Headquartered in Calgary, AL, Canadian Natural is a leading independent energy company that engages in the exploration, development, and production of oil and natural gas.

Shares of the company have outperformed the industry in the past month. The stock has declined 2.3% compared with the industry's 2.9% fall. 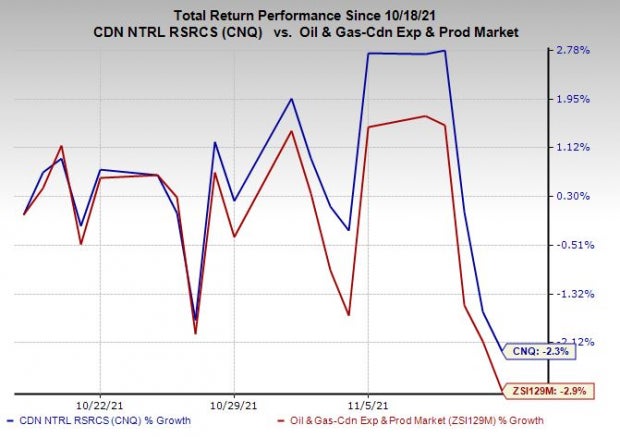 Houston, TX-based Marathon is a leading oil and natural gas exploration and production company. MRO's operations are mainly concentrated in the United States (including Oklahoma, Eagle Ford, Bakken and Northern Delaware) and Equatorial Guinea. As of 2020 end, MRO had approximately 972 million oil-equivalent barrels in net proved reserves (52% crude oil/condensate and 69% proved developed) and 86% was located in the United States.

In the past year, shares of Marathon have gained 209.4% compared with Zacks Exploration and Production Industry's growth of 116.4%. Moreover, MRO's earnings for 2021 are expected to surge 62.4% year over year. The company currently has a Zacks Style Score of C for Value, and B for Growth and Momentum.

Eni is among the leading integrated energy players in the world. Its upstream operations involve the exploitation and production of oil and natural gas resources. Through midstream activities, Eni transports and stores hydrocarbons. Eni also engages in refining hydrocarbons and distributing the end-products in 71 nations. Apart from providing natural gas, the integrated oil major generates and sells electricity.

In the past year, shares of Eni have gained 57.4% compared with the industry's growth of 51.3%. In the past 60 days, the Zacks Consensus Estimate for Eni's 2021 earnings has been raised by 45.1%. Eni is also projected to see a year-over-year earnings rise of 21% in 2021. Eni beat the Zacks Consensus Estimate three times in the last four quarters and missed once, the earnings surprise being 0.43%, on average.

Calgary, Canada-based Cenovus is a leading integrated energy firm, with its entire operation of oil and gas production concentrated in Canada. Starting from pumping out oil from its oil sand projects in Canada, CVE's operations comprise marketing the produced oil, natural gas and natural gas liquids.

Shares of Cenovus have gained 182.9% in the past year compared with the industry's growth of 79.6%. CVE's earnings for 2021 are expected to rise 98.2% year over year. CVE has witnessed two upward revisions in the past 30 days. CVE is valued at $25.7 billion and offers a quarterly dividend of 3.5 Canadian cents.