Lincoln National Corporation’s (LNC - Free Report) board of directors recently authorized an increase to its existing share repurchase program aimed at returning more value to shareholders. The latest hike in authorization, which does not have an expiry date, will enable LNC to buy back shares of up to $1.5 billion.

Lincoln National boasts of an impressive history of returning value to shareholders via share buybacks. However, the COVID-19 induced market volatilities had compelled most insurance companies to temporarily halt their share buyback programs and LNC was no exception to the trend. As a result, the Zacks Rank #3 (Hold) leading life insurer had put share buyback activities temporarily on hold from second-quarter 2020.

Nevertheless, backed by gradual economic recovery, Lincoln National has commenced buying back shares from the fourth quarter of 2020.

The latest authorization increase is expected to offer additional capacity to Lincoln National for conducting incremental and regular share buybacks along with reducing debt level. LNC has funds available for pursuing incremental share buybacks. The block sale with Resolution Life in October 2021 offered proceeds of $1.2 billion to Lincoln National, out of which $900 million is intended to be spent on incremental share repurchases. These buybacks are likely to be completed by the end of the first quarter of 2022. In the meantime, LNC will continue to pursue regular share buybacks.

Lincoln National has been a regular dividend paying company since 2013 and consistently increased dividends every year. The latest hike of 7% was announced in November 2021.

A robust financial position driven by a sound balance sheet and strong cash generation capabilities over the years has aided Lincoln National to engage in accelerated and prudent capital deployment measures. The cash balance of LNC remains much higher than the short-term debt as of Sep 30, 2021, which is indicative of a robust solvency position.

During the first nine months of 2021, Lincoln National rewarded shareholders to the tune of share buybacks and dividends worth $455 million and $240 million, respectively.

Prudential Financial managed to return capital to its shareholders in the form of share repurchases worth $2.1 billion and dividend worth $1.4 billion.

CNO Financial rewarded its shareholders with share buybacks to the tune of $302.4 million and dividends worth $50.1 million.

Radian Group bought back shares worth $257 million and paid dividends worth $78.9 million.

Shares of Lincoln National have surged 72.2% in a year compared with the industry’s growth of 8.8%. You can see the complete list of today’s Zacks #1 Rank (Strong Buy) stocks here. 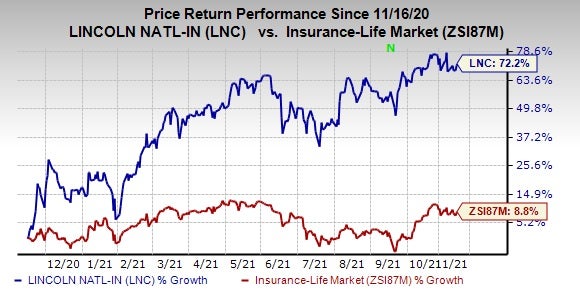 Shares of Prudential Financial, CNO Financial and Radian Group have gained 46.5%, 17.4% and 14.3%, respectively, in the same time frame.