The positive CHMP opinion for Ascendis’ TransCon hGH was based on encouraging data from three late-stage studies — heiGHt, fliGHt and enliGHten, which evaluated the candidate in more than 300 pediatric patients with GHD. A decision from the EMA related to the approval for the candidate in Europe is expected by the end of January.

In August, Ascendis’ TransCon hGH was approved by the FDA as a treatment for growth failure due to inadequate secretion of endogenous growth hormone (“GH”) in pediatric patients 1 year or older and who weigh at least 11.5 kg, with the tradename of Skytrofa. The drug has the potential to replace the current standard-of-care of daily somatropin therapies, including Pfizer’s (PFE - Free Report) Genotropin, due to its once-weekly administration.

Shares of Ascendis have declined 6.6% so far this year compared with the industry’s decrease of 13.9%. 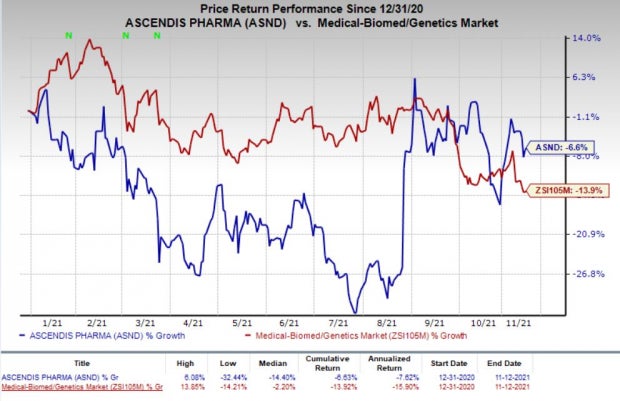 Pfizer’s Genotropin generated $284 million in the first nine months of 2021. However, the sales of Pfizer’s drug were down 10.1% year over year. A generic version of Pfizer’s GHD drug has been available since 2008.

Pfizer is currently seeking approval for a new GHD candidate, somatrogon, in the United States, Europe and Japan. Potential approvals in these countries or regions are expected next year.

Novo Nordisk (NVO - Free Report) is another company with an FDA-approved, once-weekly treatment for GHD.

Novo Nordisk’s Sogroya was approved in the United States for adults with GHD last year. Novo Nordisk’s GHD drug also received approval in Europe earlier this year. However, Novo Nordisk is yet to report any sales of the drug so far.

I-Mab is currently evaluating the candidate in a phase III study. Earlier this month, I-Mab also inked an agreement with Jumpcan Pharmaceutical Group for the development and commercialization of the candidate in mainland China.