U.S. stock markets have been witnessing an impressive rally this year, with just around seven weeks to complete 2021. However, market participants seem a little nervous as the coronavirus-led massive fiscal stimulus has ended and the Fed has decided to systematically eliminate the monetary stimulus paving the path for the first rate hike next year since March 2020. Moreover, soaring inflationary pressure has compelled many investors to think that the central bank may hike rates early next year instead of mid-2022.

On Nov 15, President Joe Biden signed a bipartisan infrastructure bill of $550 billion in addition to the previously approved funds of $450 billion for five years. With this, the bill has become a new law. The law aims at establishing the United States with the world's best economic infrastructure. Total spending may go up to $1.2 trillion if the plan is extended to eight years.

The infrastructure development law will provide $100 billion toward roads, bridges and other major projects. It will invest $66 billion in freight and passenger rail, including potential upgrades to Amtrak. The project will provide $11 billion toward reducing car crashes and fatalities through a “Safe Streets for All” program. The law allocates $39 billion to modernize public transit and improve access for disabled people.

The newly introduced massive infrastructure development project will be a major catalyst for the U.S. stock markets in 2022. Various segments of the economy such as basic materials, industrials, telecommunications and utilities will benefit immensely with more job creation for the economy.

On Nov 15, President Biden also urged the Congress to clear a new $1.75 trillion spending plan for investment in the social safety net and climate policy. Biden is “confident” that the House will pass the bill eventually the Senate. The President said, “Together with the infrastructure bill, millions of lives will be changed for the better.”

On Nov 4, Bloomberg reported citing a National Security Council official that the ‘White House is pressing U.S. Congress to quickly pass legislation providing $52 billion to help computer chip manufacturers and ease a shortage of the components vital for a range of industries.’

In the absence of the pandemic-induced fiscal and monetary stimulus, two above-mentioned infrastructure projects and the proposed CHIPS Act to usher in a resurgence of semiconductor manufacturing in the United States, will play the role of the stock market’s future catalysts.

We have narrowed down our search to five stocks that are likely to gain from the Biden administration’s infrastructure development legislation. These companies have strong growth potential for the rest of 2021 and have seen positive earnings estimate revisions in the last 30 days. Each of our picks carries either a Zacks Rank #1 (Strong Buy) or 2 (Buy). You can see the complete list of today’s Zacks #1 Rank stocks here.

The chart below shows the price performance of our five picks in the past month. 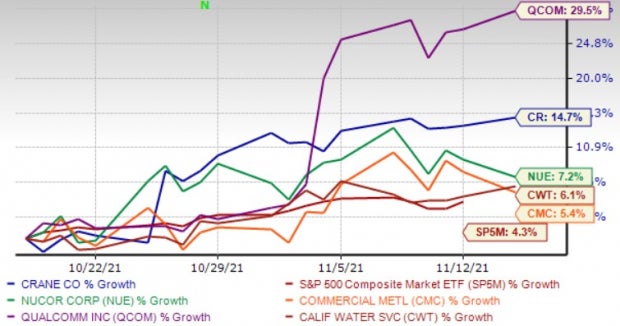 Zacks Rank #1 NUE has an expected earnings growth rate of more than 100% for the current year. The Zacks Consensus Estimate for current-year earnings improved 7.2% over the last 30 days.

Qualcomm Inc. is well-positioned to benefit from a solid 5G traction with greater visibility to meet its long-term revenue targets. For calendar-year 2021, 5G handsets with QCOM chip are expected to witness 150% year-over-year growth at the midpoint to about 450-550 units.

Qualcomm has raised the bar for driverless cars with the launch of the first-of-its-kind automotive platform — Snapdragon Ride — which enables automakers to transform their vehicles into self-driving cars using AI.

Zacks Rank #2 QCOM has an expected earnings growth rate of 23.1% for the current year (ending September 2022). The Zacks Consensus Estimate for current-year earnings improved 1.1% over the last 7 days.

Zacks Rank #2 CR has an expected earnings growth rate of 67.5% for the current year. The Zacks Consensus Estimate for its current-year earnings has improved 7.6% over the last 30 days.

Commercial Metals Co. is poised to gain on robust steel demand, stemming from elevated spending on residential and construction sector in North America and recovery in the manufacturing sector. Steel sales volumes in Europe are anticipated to remain healthy on increasing demand from construction and industrial end market.

Construction activity in Poland remains particularly strong aided by the residential markets. These factors will boost steel shipment levels in North America and Europe, and support CMC’s results in fiscal 2022.

Zacks Rank #1 CMC has an expected earnings growth rate of 3.7% for the current year (ending August 2022). The Zacks Consensus Estimate for current-year earnings improved 25.3% over the last 30 days.

California Water Service Group has invested in infrastructure. This along with CWT’s strategic acquisitions will help it provide customers with efficient water and wastewater services. New rates coming into effect will constantly drive the earnings of California Water Service. Also, the utility is benefiting from consistent customer wins.

California Water Service is not only boosting its operations via inorganic activities but also resorting to organic prospects. In August, it completed a water main replacement project in northern Salinas while in September CWT concluded similar large-scale projects, one each in Woodside and Bodfish.

In July, the utility retired its old 100,000-gallon elevated water tank from service as it did not meet the new seismic standards. Such strategic actions to upgrade California Water Service’s infrastructure are likely to boost its customer base in the future, by increasing the resilience and reliability of its operations.

Zacks Rank #2 CWT has an expected earnings growth rate of 0.5% for the current year. The Zacks Consensus Estimate for current-year earnings improved 7.6% over the last 30 days.