American Tower (AMT) Announces Deal to Buy CoreSite for $10.1B

Moreover, with the addition of CoreSite’s data and cloud management capabilities to its mobile edge compute business American Tower will be able to offer a huge variety of 5G and cloud solutions.

Per management, “We expect the combination of our leading global distributed real estate portfolio and CoreSite’s high quality, interconnection-focused data center business to help position American Tower to lead in the 5G world.”

The transaction, expected to close by the end of this year, will likely be accretive to American Tower’s adjusted funds from operations (AFFO) per share and be increasingly accretive over time.

This marks American Tower’s second acquisition deal this year. Previously, AMT agreed to acquire Telxius Towers for $9.4 billion in cash in January. In June, it closed the first tranche of this previously announced acquisition, which comprised roughly 20,000 communications sites in Germany and Spain.

Shares of this Zacks Rank #3 (Hold) company have appreciated 5.9% compared with its industry's 10.9% growth, in the past six months. You can see the complete list of today’s Zacks #1 Rank (Strong Buy) stocks here. 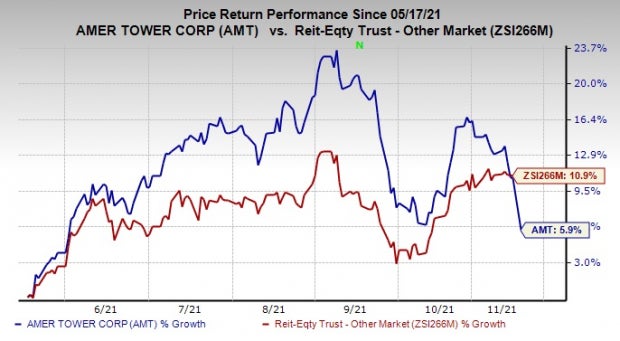 However, tenant concentration is very high for American Tower. In fact, of its top three customers, Verizon (VZ - Free Report) and AT&T (T - Free Report) accounted for majority of the company’s total revenues.

Hence, loss of either Verizon or AT&T, consolidation among them, or reduction in network spending will significantly hamper American Tower’s top line.