The auto equipment provider reported third-quarter 2021 adjusted earnings of 56 cents per share, declining from the year-ago figure of $1.95. The bottom line also missed the Zacks Consensus Estimate of 75 cents per share. For the reported quarter, net sales slipped 13.3% from the prior-year quarter to $7,919 million but came ahead of the consensus mark of $7,849 million.

The Body Exteriors & Structures segment’s revenues for the reported quarter were $3,185 million, contracting 17% year over year owing to lower global light vehicle production amid chip crunch. The metric, however, came ahead of the consensus mark of $3,183 million. The segment reported an adjusted EBIT of $98 million, tanking 75% year over year amid lower sales and high costs. The EBIT also missed the consensus mark of $123 million.

For the September-end quarter, the Power & Vision segment revenues dipped to $2,501 million from the prior-year figure of $2,722 million. The metric, however, beat the consensus mark of $2,246 million. Lower year-over-year sales, high production costs and electrification spending resulted in segmental EBIT of $67 million, plummeting from $227 million recorded in the comparable year-ago period. The metric, however, topped the consensus mark of $53 million.

Magna had $2,748 million cash and cash equivalents as of Sep 30, 2021. It had long-term debt of $3,908 million. For the reported quarter, cash provided from operating activities totaled $400 million.

Shares of MGA have edged up 24.7% year to date. You can see the complete list of today’s Zacks #1 Rank (Strong Buy) stocks here.

Here is a rundown of key takeaways from the quarterly results of Magna’s close competitors.

BorgWarner reported adjusted earnings of 80 cents per share for third-quarter 2021, declining from 88 cents recorded in the prior-year period. The bottom line, however, beat the Zacks Consensus Estimate of 66 cents. Net sales of $3,416 million outpaced the Zacks Consensus Estimate of $3,342 million. The top-line figure also grew 34.8% year over year, thanks to the Delphi Technologies buyout and increased demand for products.

American Axle reported adjusted earnings of 15 cents per share for third-quarter 2021, topping the Zacks Consensus Estimate of 2 cents. The bottom line, however, fell from $1.15 a share earned a year ago. The company generated quarterly revenues of $1,213.1 million, surpassing the Zacks Consensus Estimate of $1,179.6 million. Revenues declined 14.2% on a year-over-year basis, led by the unfavorable impact of semiconductor chip shortage. 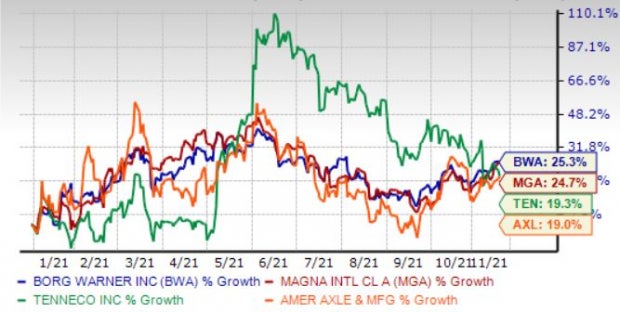