Chevron Corporation (CVX - Free Report)  and partners agreed to purchase carbon credits worth more than A$230 million for its Gorgon carbon capture and storage ("CCS") project in Western Australia.

The move is part of Chevron's plans to offset penalties after failing to capture enough emissions from the Gorgon CCS project. Additionally, Chevron will invest A$40 million in low-carbon projects in Western Australia.

Gorgon is the country's most notably single-resource natural gas project and features the largest natural gas projects globally. Expenses, which could amount to more than A$250 million, will be divided among the Gorgon project partners. Chevron operates the project with a 47.3% ownership interest.

The government of Western Australia penalized the Gorgon project for injecting significantly less carbon dioxide (CO2) than planned since its initiation. In 2006, the Western Australia government allowed Chevron to develop the Gorgon liquefied natural gas facility on Barrow Island, provided that CO2 from the gas produced offshore would be buried under the island using all practicable means. At least 80% of emissions had to be buried over a five-year target for carbon capture and storage.

Over the five-year period that ended in July, an estimated 15.3 million metric tons (mmt) of CO2 from the offshore gas fields flowed to Barrow Island, only 32% of which was buried. The injected CO2 amount missed the 80% minimum by 7.4 million tons.

Chevron intends to fulfill the obligations by purchasing Australian carbon credit units and offsets from two international programs, the Gold Standard and the Verified Carbon Standard. The integrated oil major will continue to purchase the offsets by July 2022.

Headquartered in San Ramon, CA, Chevron is one of the largest publicly-traded oil and gas companies. It is fully integrated, with operations all over the world.

Shares of Chevron have outperformed the industry in the past three months. The stock has gained 21.3% compared with the industry's 19.1% growth. 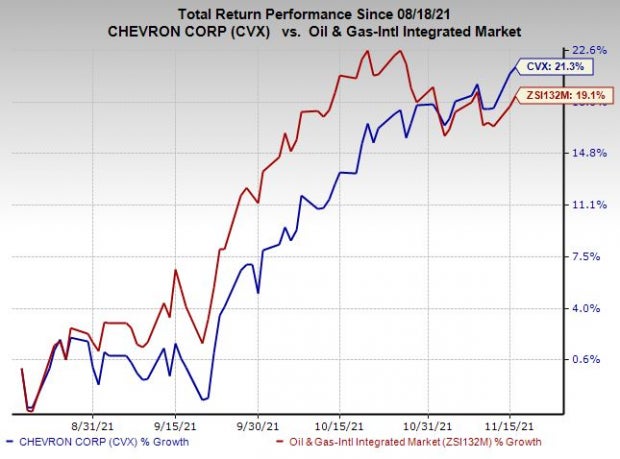 Houston, TX-based Occidental Petroleum is an integrated oil and gas company, with significant exploration and production exposure. OXY is also a producer of a variety of basic chemicals, petrochemicals, polymers and specialty chemicals. As of 2020-end, Occidental Petroleum's preliminary worldwide proved reserves totaled 2.91 billion BOE compared with 3.9 billion BOE at the end of 2019.

In the past year, shares of Occidental Petroleum have increased 147.8% compared with the industry's growth of 113.5%. OXY's earnings for 2021 are expected to surge 150% year over year. Occidental Petroleum has also witnessed eight upward revisions in the past 60 days. In the third quarter, OXY achieved the planned divestiture target of $10 billion by entering a deal to sell its interest in two offshore Ghana assets for $750 million.

PDC Energy is an independent upstream operator that engages in the exploration, development and production of natural gas, crude oil and natural gas liquids. PDCE, which reached its present form following the January 2020 combination with SRC Energy, is currently the second-largest producer in the Denver-Julesburg Basin. As of 2020-end, PDC Energy's total estimated proved reserves were 731,073 thousand barrels of oil equivalent.

In the past year, shares of PDC Energy have increased 261.3% compared with the industry's growth of 148.3%. PDCE's earnings for 2021 are expected to surge 276% year over year. In the past 60 days, the Zacks Consensus Estimate for PDC Energy's 2021 earnings has been raised by 26%. PDCEbeat the Zacks Consensus Estimate in all of the last four quarters, ending with an earnings surprise of 51.06%, on average.

SM Energy is one of the most attractive players in the exploration and production space. It engages in the exploration, exploitation, development, acquisition, and production of natural gas and crude oil in North America. SM's operations are focused in the Permian basin, and the South Texas and Gulf Coast region. It has total 443,188 net acres under its possession, of which 33.5% is developed.

In the past year, shares of SM Energy have increased 1000.1% compared with the industry's growth of 148.3%. SM's earnings for 2021 are expected to surge 695.7% year over year. SM Energy currently has a Zacks Style Score of A for Growth and B for Momentum. The upstream energy player beat the Zacks Consensus Estimate thrice in the last four quarters and missed once, ending with an earnings surprise of 126.3%, on average.