Known as the Freeport LNG CCS project ("FLNG CCS"), the facility will be developed beside Freeport LNG's natural gas pre-treatment facilities along the Gulf Coast. The proposed facility would capture and store carbon emissions from Freeport LNG's liquefaction and export facility near Freeport, Texas.

Beside this, the project site is situated near major industrial facilities, which can provide up to an additional 15 million metric tons per annum (mpta) of carbon dioxide (CO2) emissions. This offers further scope for development.

Freeport LNG's liquefaction facility produces 90% less emissions as it uses electric motors instead of gas turbines to drive the liquefaction compressors on its trains. The development of the CCS project will reduce the amount of carbon emissions produced from the facility.

Talos Energy will serve as the manager and operator of the project for 30 years along with partner Storegga. Storegga and Talos Energy formed a partnership that leverages their expertise for the rapid and profitable delivery of CCS clusters in the Gulf Coast region.

The FLNG CCS project, which is expected to start up by 2024 end, follows several major developments in the companies' CCS portfolio. It is expected to be the first of such projects from the Talos Energy-Storegga partnership to serve Gulf Coast industrial facilities and significantly contribute to a carbon-neutral future in the United States.

Oil and gas companies are getting actively involved in CCS-related projects as the same offers a transition pathway for the rapid and effective reduction of CO2 emissions beyond what can be achieved by alternative methods like electrification and renewable fuels. Talos Energy aims to become a leader in Gulf Coast CCS opportunities by leveraging its expertise in offshore drilling and production to its carbon management goals.

Headquartered in Houston, TX, Talos Energy is a leading upstream company that engages in the exploration, development, and production of oil and gas properties.

Shares of the company have underperformed the industry in the past three months. The stock has gained 17.4% compared with the industry's 40.9% growth. 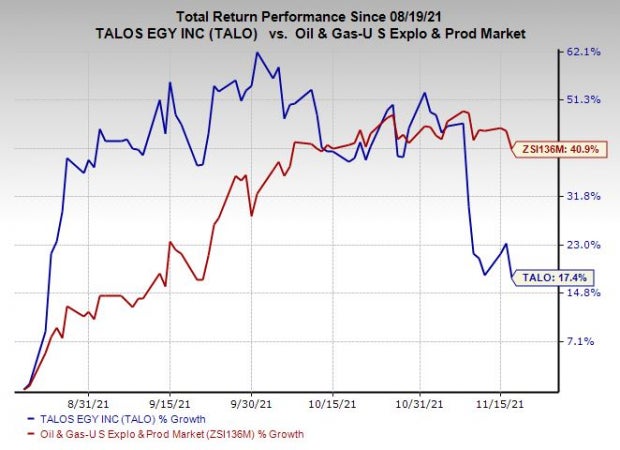 The company currently has a Zack Rank #3 (Hold).

Investors interested in the energy sector might look at the following stocks that presently carry a Zacks Rank #2 (Buy). You can see the complete list of today's Zacks #1 Rank (Strong Buy) stocks here.

Petrobras S.A. (PBR - Free Report) : Petroleo Brasileiro or Petrobras is one of the largest publicly-traded Latin American oil companies, which dominates Brazil's oil and gas sector. PBR produces most of Brazil's crude oil and natural gas and accounts for almost the entire refining capacity of the country. Petrobras is currently valued at $67.4 billion.

In the past year, shares of Petrobras have gained 19.5% against the industry's 3.1% decline. PBRis expected to see earnings growth of 579.1% in 2021. PBR currently has a Zacks Style Score of A for both Value and Growth. In the third quarter of 2021, Petrobras generated a positive free cash flow for the 26th consecutive quarter, with the metric coming at $9,019 million, rising from $7,468 million recorded in last year's corresponding period.

In the past year, shares of ExxonMobilhave surged 82.6% compared with the Zacks Oil and Gas Integrated Industry's growth of 55.2%. XOM's earnings for 2021 are expected to surge 1,636.4% year over year. ExxonMobilrecently announced its fourth-quarter dividend at 88 cents per share, reflecting an increase from 87 cents in the previous quarter. Looking at the dividend history, it has been clear that XOM is strongly focused on returning capital to shareholders. Since more than 39 consecutive years, the energy firm has hiked its annual dividend payment.

In the past year, shares of Continental Resources' have surged 203.8% compared with the industry's growth of 141.7%. CLR's earnings for 2021 are expected to surge 486.3% year over year. CLR currently has a Zacks Style Score of A for Growth, and B for Value and Momentum. Notably, CLR's board of directors increased its quarterly dividend payment to 20 cents per share from 15 cents in the previous quarter. Continental Resources also resumed its existing stock repurchase program. CLR already executed $65 million of share repurchases in the September-end quarter, while $618 million of the share-repurchase capacity remains available.