U.S. telecom stocks traded relatively flat on average over the past week as the industry treaded with caution, navigating some concerns regarding its interference with aviation safety standards that prevented the industry from going gung-ho about the signing of the infrastructure bill into law. The infrastructure bill includes a $65 billion provision to significantly expand broadband access to Americans, as the administration aims to fortify its technological prowess to thwart the dominance of countries like China. The plan envisions reaching the underserved areas of the country and prioritizing support for broadband networks affiliated with local governments, nonprofit organizations, and cooperatives to encourage strong competition with privately-owned companies.

The euphoria surrounding the infrastructure bill was marred by concerns raised by the Federal Aviation Administration about aviation safety being likely compromised by the planned use of spectrum for 5G wireless communications. This, in turn, has forced several leading carriers to defer the commercial launch of the C-band wireless service till January next year as both the industry regulators seek to resolve the issue. Moreover, certain industry experts remain circumspect regarding the implementation of the infrastructure bill and effectively fulfill the President’s vision of “build back better”. Meanwhile, the FCC completed the 3.45 GHz auction for $21.8 billion that makes available 100 megahertz of mid-band spectrum for commercial use across the country for fixed or mobile uses. The winning bidders reportedly won 4,041 of the 4,060 available generic blocks on offer.

President Biden continued his hard stance against Beijing and signed the Secure Equipment Act that empowers the FCC to prevent the use of any telecommunications equipment manufactured by China-backed entities in the domestic markets. The bill extended the purview of FCC control to private companies and would not only deter it from approving new requests but also revoke the prior equipment approval on perceived risks to national security interests. This follows an earlier directive to bar China Telecom from operating in the United States over national security concerns and a consequent petition in an U.S. appeals court by the Beijing firm to block the decision in order to prevent irreparable loss to businesses and customer relationships.

1.     Qualcomm took the investor community by surprise when it revealed some ambitious growth targets through fiscal 2024. The company expects to witness a stellar rise in its addressable market opportunities from $100 billion at present to more than $700 billion in the next decade, as it continues to diversify its revenue stream to cater to various customer segments across several industries.

Management expects fiscal 2024 revenues to reach $46 billion with contribution from IoT devices to be around $9 billion. Revenues from QCT segment of Qualcomm are expected to record a CAGR of mid-teens by fiscal 2024 with an operating margin of more than 30%. Automotive revenues are expected to grow to $3.5 billion in five years and $8 billion in 10 years.

2.     Ericsson and Ooredoo Qatar are collaborating to bring a unique 5G experience for football fans across the Middle Eastern country in the upcoming FIFA World Cup tournament. The partnership between the Sweden-based telecommunications equipment manufacturer and the Qatar-based carrier is likely to add a new dimension to this global football extravaganza set to be held from November to December 2022.

Per the deal, the two firms will work in unison to offer seamless 5G connectivity in eight stadiums across six cities, as well as in dedicated fan zones, airports, and places of attraction. This will entail Ericsson to provide network optimization by applying industry-leading AI-powered technologies and leverage live and predictive network data to achieve the maximum potential. The firms will also aim to ensure optimum performance by effectively managing Ericsson Radio System products.

3.    Viasat has inked a Buyer-Furnished Equipment deal with Embraer to offer its In-Flight Connectivity (IFC) system as a line-fit option on Embraer’s family of E2 aircraft. Viasat is the first Ka-band IFC supplier to have a line-fit IFC solution on the Embraer E2 family.

By choosing Viasat’s IFC system as a factory option on the Embraer E2 aircraft prior to delivery, airlines will be able to offer an advanced IFC experience to passengers and flight crew members. They can also avoid costly downtime associated with taking the aircraft out of service for post-production IFC retrofits.

4.    Arista has joined the Microsoft Intelligent Security Association — an ecosystem comprising software vendors and security service providers that have combined their solutions to offer better protection against modern cyber threats.

Arista was selected based on the integration between its NDR (Network Detection and Response) platform and Microsoft Azure Sentinel. This enables faster remediation of threats by combining network context and threat detection with log-based and endpoint insights within Azure Sentinel. Arista’s Awake Security is an NDR platform provider that combines artificial intelligence with human expertise to autonomously hunt and respond to insider and external threats.

With increasing data demand, ubiquitous remote users are required to provide critical IT services, irrespective of their location. However, it becomes difficult for the IT teams to manage end-user experience across an ecosystem this broad. In order to tackle this issue, Viavi’s Observer 3D v18.6 fills the visibility gaps and enhances the overall performance that helps the business. 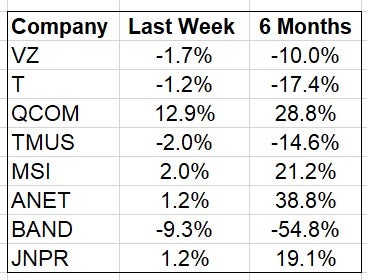 In the past five trading days, Qualcomm has been the best performer with its stock gaining 12.9% while Bandwidth has declined the most with its stock falling 9.3%.

Over the past six months, Arista has been the best performer with its stock appreciating 38.8% while Bandwidth has declined the most with its stock falling 54.8%.

Over the past six months, the Zacks Telecommunications Services industry has declined 9.3% while the S&P 500 has rallied 14.7%. 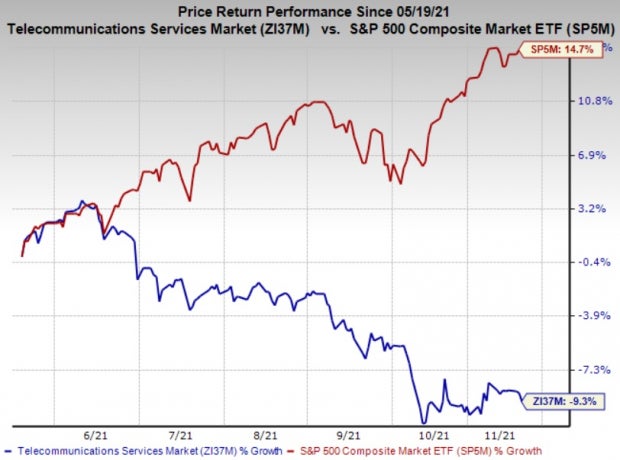 How is Central Garden & Pet (CENT) Placed Before Q4 Earnings?