The European Automobile Manufacturers Association (“ACEA”) released data for passenger car registrations made in October 2021. In a telling sign that the chip shortage continues to wreak havoc on the auto industry, new car registrations tailed off 30.3% year over year to 665,001 units, marking the fourth straight monthly decline. Most of the European Union (EU) markets saw double-digit declines. Registrations in major markets like Spain, Germany, France, and Italy plummeted 20.5%, 34.9%, 30.7%, and 35.7%, respectively. Despite the recent sales drop amid the global chip crunch, cumulative volumes over the first 10 months of 2021 totaled 8.2 million units, up 2.2% year over year.

2. Autoliv set its three-year (2022-2024) financial targets. The company expects to outgrow annual light vehicle production by 4% between 2022 and 2024. Post 2024, sales are envisioned to grow organically by 4-6% per year. The auto equipment provider outlined other key agendas, including its aim for sustainable growth, improvement in efficiency targeting a 12% adjusted operating margin from 2022 to 2024, commitment toward shareholder value creation and cash conversion of at least 80% as well as a new stock repurchase program of up to $1.5 billion over the next three years.

In a separate development, Autoliv and SSAB initiated collaborative research to develop fossil-free steel components for automotive safety products such as airbags and seatbelts. The partnership aims for a new technology that will replace the traditional coking coal with hydrogen and be the world's first fossil-free steelmaking technology with a zero-carbon footprint. Investors should note that ALV is committed to becoming carbon neutral by 2030 and aims for net-zero missions across the supply chain by 2040.

3. Stellantis issued a recall for more than 246,000 Ram Heavy Duty and Chassis Cab trucks, mainly in North America, to replace the fuel pumps that can lead to stalling or failure of the engine due to wear. The initiative covers 2019 and 2020 truck models equipped with 6.7-liter Cummins diesel engines.

According to reports, customer complaints about fuel pump failures and hefty repair bills prompted an investigation by the National Highway Traffic Safety Administration. Stellantis, however, claimed that the recall decision was made before the announcement of the inquiry. Owners can get the pumps repaired from dealers at zero cost and will be notified by next month. STLA currently sports Zacks Rank #1 (Strong Buy). You can see the complete list of today’s Zacks #1 Rank stocks here.

Volkswagen notified that an electric cable defect could disable the passenger airbag. The possibility of a faulty cable used in the passenger occupant detection system may put the vehicle’s software at risk of misdiagnosing a problem and disabling the passenger airbag, thereby increasing the chances of injury in a crash.

To fix the problem, dealers will replace the cable and the heating map or the entire seat cover. Letters notifying the same to owners will be sent out starting Jan 7, 2022. The current recall is an expansion of the same problem faced in 2019. Vehicles repaired then will have to be fixed again.

5. Toyota is recalling more than 227,400 Camry sedans that stand the risk of suddenly losing the power assist in the brake system. The recall initiative covers certain 2018 and 2019 midsize sedans models, especially in North America.

Toyota stated that there can be premature wear in some brake system components. The failure of power assistance will not hamper the operation of the brakes. However, it will make the driver more prone to crash. Owners of recalled cars will be notified by mid-January 2022. The dealers will inspect a vacuum pump and repair or replace it in the affected vehicles. 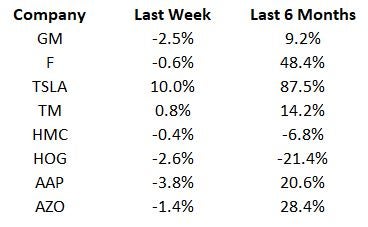 Industry watchers will keep a tab on October commercial vehicle registrations in the EU, likely to be released by the ACEA this week. Also, stay tuned for updates on how automakers will tackle the semiconductor shortage and make changes in business operations.