Results benefited from solid demand conditions across markets and product categories. The company also gained from a robust back-to-school season and strong customer relationships. Management highlighted that the company registered growth, despite the current supply chain challenges. Foot Locker completed the acquisition of WSS in the third quarter. Subsequent to the quarter, it closed the atmos transaction as well.

The company updated its fiscal 2021 guidance. Management is cautious regarding supply chain headwinds and expects the same to persist during the fourth quarter.

Shares of Foot Locker fell nearly 12% during the trading hours on Nov 19. The stock has declined 13.6% in the past three months compared with the industry’s fall of 3.5%. 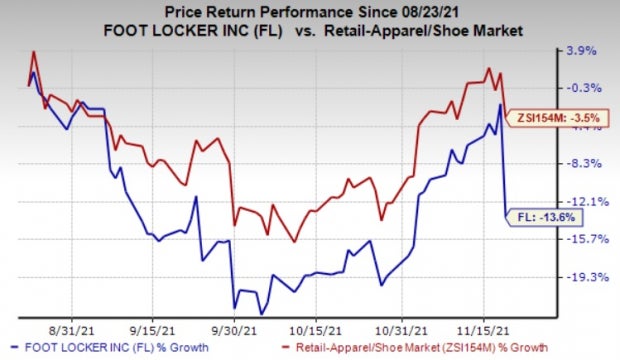 The athletic shoes and apparel retailer posted adjusted earnings of $1.93 per share, which surpassed the Zacks Consensus Estimate of $1.36. The bottom line increased almost 60% from $1.21 per share earned in the prior-year quarter and 71% from $1.13 a share recorded in third-quarter fiscal 2019.

Total sales of $2,189 million rose 3.9% year over year and topped the consensus estimate of $2,137 million. Excluding the foreign-currency fluctuation impact, total sales rose 3.6%. The top line rose 13.3% from third-quarter fiscal 2019 reading. The top line includes gains worth $56 million from the acquisition of WSS.

Comparable store sales (comps) moved up 2.2% in the quarter. In August, the metric increased low double-digits. In September, the same declined high single digit. In October, comps were up low-single digit.

During the third quarter, 97% of the company’s global store fleet was open, with temporary closures in Australia and New Zealand as well as certain markets in Asia and Germany. The company’s store channel registered comps growth of 4.2% year on year. Store traffic increased nearly 30% year over year.

In the digital channel, sales were down 4.6%, as it lapped strong growth witnessed in the year-ago period. Digital sales penetration rate was 19.8%, down160 basis points (bps) year on year.

In EMEA, pent-up demand was sturdy as stores reopened in all countries. The region saw strength across apparel, women's footwear and strategic brands like Converse and New Balance. This led to double-digit comp growth at Foot Locker Europe and high-digit comp gain at Sidestep.

The company’s APAC region was down slightly, as it continued to reel under the pandemic-led challenges. Foot Locker Pacific saw low single-digit comp gain, while Foot Locker Asia was down mid-single digits. Management continues to progress with its expansion strategy within Asia.

An Insight Into Margins

Foot Locker's gross-margin rate in the reported quarter was 34.7%, up 380 bps from the prior-year quarter’s level. The metric was driven by robust demand as well as fresh and lean inventory levels, which supported lower levels of promotional activity. Merchandise margin increased 470 bps year over year, driven by a reduction in markdowns.

During the third quarter, the company opened 32 stores and remodeled or relocated 29 stores. It closed 80 stores, including 32 Footaction closures and 18 conversions. It also acquired 93 WSS stores.

As of Oct 30, 2021, the company operated 2,956 stores in 27 countries in North America, Europe, Asia, Australia, and New Zealand. In addition, 136 franchised Foot Locker stores were operating in the Middle East.

This Zacks Rank #3 (Hold) company ended the fiscal third quarter with cash and cash equivalents of $1.339 million. Long-term debt and obligations under finance leases debt amounted to $456 million and shareholders’ equity of $3,342 million.

During the quarter, Foot Locker repurchased 2.75 million shares for $129 million. It also paid out a quarterly dividend of 30 cents per share for a total of $30 million.

Management highlighted that the company invested $737 million during the third quarter to complete the acquisition of WSS. After the end of the third quarter, it acquired atmos for $360 million, subject to customary adjustments. These buyouts will help the company to expand in new markets, customer segments and price points. These additions will enhance its relationships with the existing vendor partners and build new relationships.

The company expects to gain from the acquisitions of WSS and atmos. Foot Locker expects to keep gaining from strong consumer demand and inventory levels, keeping it well positioned for the holiday season. It is apprehensive about encountering industry-wide supply chain headwinds. This includes port congestions and factory shutdowns, which are likely to dent the company’s fourth-quarter performance and persist in fiscal 2022.

For fiscal 2021, management expects to deliver sales growth in the high-teens bracket, with comp sales in the mid-teens. Gross margin is likely to be up 540-550 bps year on year, driven by a more rational promotional environment. SG&A expenses are expected to leverage between 40-50 bps year over year.

Adjusted earnings are envisioned in the bracket of $7.53-$7.60 per share compared with $7.00-$7.15 anticipated previously. The company delivered earnings per share (EPS) of $2.81 in the last fiscal. The Zacks Consensus Estimate for fiscal 2021 earnings is currently at $6.95.

Tractor Supply Company, a rural lifestyle retailer in the United States, flaunts a Zacks Rank #1 (Strong Buy). The company has a trailing four-quarter earnings surprise of 22.8%, on average. Shares of TSCO have increased 18.2% in the past three months. You can see the complete list of today’s Zacks #1 Rank stocks here

The Zacks Consensus Estimate for Tractor Supply Company's current financial year sales and EPS suggests growth of 19% and 23.9%, respectively, from the year-ago quarter's reported figures. TSCO has a long-term earnings growth rate of 9.6%.

Boot Barn Holdings, the lifestyle retailer of western and work-related footwear, apparel and accessories, sports a Zacks Rank #1. Shares of BOOT have surged 48.2% in the past three months.

The Zacks Consensus Estimate for Boot Barn Holdings’ current financial year sales and EPS indicates growth of 54.4% and 183.3%, respectively, year over year. BOOT has a trailing four-quarter earnings surprise of 35.3%, on average.

Costco, which operates membership warehouses, flaunts a Zacks Rank #1. The company has a trailing four-quarter earnings surprise of 7.7%, on average. Shares of COST have increased 17.3% in the past three months.

The Zacks Consensus Estimate for Costco’s current financial year sales and EPS suggests a rise of 9.6% and 9.7%, respectively, year over year. COST has a long-term earnings growth rate of 8.6%.