Valued at $584.8 million, the contract is scheduled to be completed by April 2026. Per the terms, Lockheed will provide system integration engineering for the development of new ASQ-239 electronic warfare/counter measure hardware to support the F-35 aircraft.

The contract will serve the U.S. Air Force, Marine Corps, Navy, and non-U.S. Department of Defense (DoD). The majority of the work related to the contract will be executed in Nashua, NH.

Supported by an international team of leading aerospace majors, F-35 enjoys a strong global presence, with the program having eight international partners, including Italy, Australia, Norway, Denmark, and Canada. Additionally, it has six foreign military sales customers that are procuring and operating the F-35 namely Israel, Japan, South Korea, Poland, Belgium, and Singapore. This surely demonstrates the huge demand that this jet program enjoys worldwide.
However, the F-35 program has been facing some criticisms lately with experts arguing that this jet is the most expensive weapon system ever built. In fact, in February, the U.S. Air Force also admitted the exuberant price of this fleet. It is imperative to mention here that in association with Pentagon, Lockheed has been trying to cut down F-35’s cost for the past few years.

Per a report by Forbes, in October 2019, Pentagon and Lockheed reached an agreement to reduce the unit cost of all three variants of F-35 by an average of 12.7% across three production lots. We believe the latest contract awarded to Lockheed will put this jet maker a step ahead toward further reduction of F-35’s cost while also boosting the fleet’s future sustainment.

Boeing incurred an adjusted loss of 60 cents per share in third-quarter 2021, which came in much wider than the Zacks Consensus Estimate of a loss of 17 cents. BA stock has risen 1.2% in the past year.

Textron reported third-quarter 2021 adjusted earnings of 85 cents per share, which exceeded the Zacks Consensus Estimate of 75 cents by 13.3%. TXT stock has gained 62.1% in the past year.

Shares of Lockheed Martin have lost 7.9% in the past year compared with the industry's decline of 28.7%. 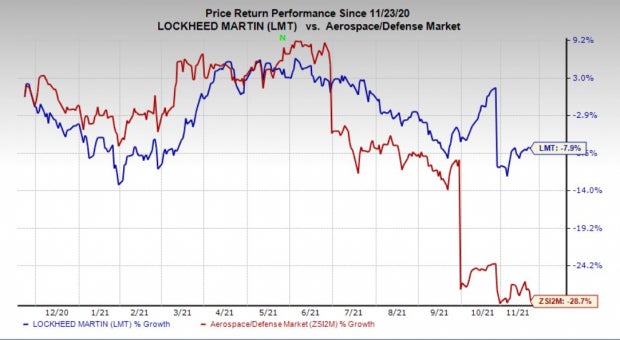