Last week, XPeng (XPEV - Free Report) and Fisker (FSR - Free Report) made headlines with the launch of Ocean SUV and G9 models, respectively. Fisker’s Ocean will hit the markets in three variants by late 2022. XPeng’s G9 model will be equipped with the company’s most advanced technology. Meanwhile, Arcimoto (FUV - Free Report) and Canoo (GOEV - Free Report) released third-quarter 2021 results. Both the firms incurred wider year-over-year loss. The loss was also wider than the Zacks Consensus Estimate amid high research & development (R&D) and selling, general & administrative (SG&A) costs. Being in the nascent stages of development, the firms’ high operating expenses are taking a toll on margins.

1. Arcimoto incurred third-quarter loss per share of 31 cents, wider than the Zacks Consensus Estimate of a loss of 24 cents and the year-ago loss of 15 cents. This Oregon-based electric vehicle (EV) manufacturer posted revenues of $1.5 million, surpassing the consensus mark by 10.2%. This compares favorably with the year-ago revenues of $0.68 million.

2. Canoo incurred third-quarter loss per share of 46 cents, wider than the Zacks Consensus Estimate of a loss of 44 cents and the year-ago loss of 20 cents. This California-based EV did not generate any meaningful revenues yet.

Canoo envisions operating expenses for 2021 in the band of $95-$115 million. Full-year capital expenditure is forecast in the range of $60-$80 million. GOEV currently carries a Zacks Rank #3 (Hold). The Zacks Consensus Estimate for 2022 earnings implies a year-over-year decline of 26.6%.

3. Fisker unveiled its flagship EV, the Ocean SUV, at the LA Auto Show. Fisker Ocean will be available in three variants — namely the Standard Sport, the Ultra and the Extreme — at different price points. While the base variant Ocean Sport is priced at $37,499, the high-range models Extreme and Ultra are priced at $68,999 and $49,999, respectively.

Fisker expects the commercial production of the models to commence in November 2022. The Ocean Sport will have an expected 0-60 mph time of 6.9 seconds with a peak horsepower of 275. It is expected to provide 250 miles of range on a single recharge. Ocean Ultra and Ocean Extreme will have an estimated 0-60 mph time of 3.9 seconds and 3.6 seconds, with an estimated peak horsepower of 540hp and 550hp, respectively. Ultra and Extreme will boast a range capacity of 340 and 350 miles, respectively, on a single recharge.

4. XPeng unveiled its new G9 flagship smart SUV at the Guangzhou International Automobile Exhibition. This will be the company’s fourth production model after G3, P7 and P5. Quoting XPeng’s co-founder Henry Xia, “G9 is our first model to be conceived and developed from the ground up for both the international and Chinese markets, bringing our most sophisticated designs to our customers worldwide.”

XPeng intends to launch the G9 model in the third quarter of 2022 in China. The model will boast the company’s most advanced technology and be equipped with XPeng’s X-Pilot 4.0 ADAS. The rising EV star of China claims that G9 will be compatible with its X-Power superchargers, which would charge the vehicle up to a 200-kilometer range in five minutes, with a maximum energy efficiency of more than 95%. 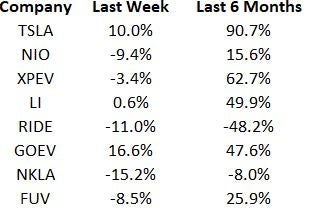