Valued at $114.6 million, the contract is scheduled to be completed by December 2022. Per the terms, Lockheed Martin will manage AEGIS Combat System Engineering Agent efforts for the design, development, integration, test and delivery of Advanced Capability Build 20.

Work related to the deal will be executed in Moorestown, NJ.

Manufactured by Lockheed Martin, Aegis Weapon System is the world’s premier naval air defense system and the sea-based element of the United States’ Ballistic Missile Defense System. A key component of this naval warfare system is the SPY-1 multi-function phased array radar, which is the world’s most advanced and versatile maritime radar. It is scalable to meet the mission needs for a range of ships from corvettes to aircraft carriers.

Globally, the Aegis Weapon System is at sea or part of current new ship construction programs for more than 100 ships.

Countries worldwide have been reinforcing their military resources due to intense geo-political tensions and amplified terrorist threats. This has spurred demand for missile systems. The United States, which is the largest exporter of military weaponries worldwide, is also focused on strengthening its military resources, with Aegis being one of the key defense programs. This is quite evident from the allotment of a $1 billion investment plan in the U.S. fiscal 2022 defense budget for Aegis Ballistic Missile Defense systems. So, we may expect a solid flow of contracts from the Pentagon involving Aegis systems.

In the past year, shares of Lockheed Martin have lost 7.2% compared to the industry's decline of 33%. 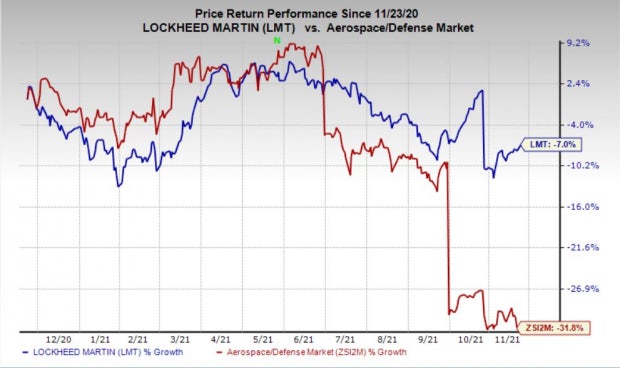 Aerojet Rocketdyne delivered an earnings surprise of 23.40% in the last-reported quarter. The Zacks Consensus Estimate for its current-year earnings has improved 3.6% over the last 60 days.

Aerojet Rocketdyne’s third-quarter 2021 sales increased 3.3% year-over-year. AJRD has gained 13.6% in the past year.

Heico delivered an average earnings surprise of 5.83% for the last four quarters. Heico’s third-quarter fiscal 2021 earnings per share of 56 cents surpassed the Zacks Consensus Estimate by 3.7% and improved 40% year-over-year.

Airbus delivered an average earnings surprise of 69.70% for the last four quarters. Airbus’ consolidated revenues, as of Sep 30, 2021, increased 17% on the back of improved jet deliveries.