Deciphera (DCPH) Gets EU Nod for Qinlock in Fourth-Line GIST

We note that Novartis has lost the patent protection for some of its drugs. Gleevec faces increasing generic competition in major markets.

The nod for Qinlock in Europe was based on efficacy data from the pivotal phase III INVICTUS study as well as combined safety results from INVICTUS and the phase I study of Qinlock.

The approval of Qinlock in the EU was expected, since in September 2021, the European Medicines Agency’s Committee for Medicinal Products for Human Use rendered a positive opinion, recommending approval for Qinlock for the treatment of fourth-line GIST.

Shares of Deciphera have plummeted 84.8% so far this year compared with the industry’s decrease of 15.8%. 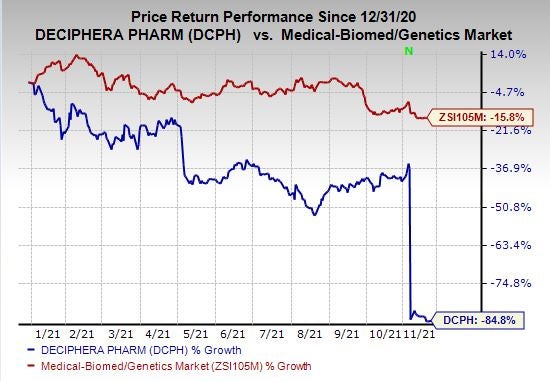 We remind investors that in May 2020, the FDA approved Qinlock for treating patients with advanced GIST who were already treated with three or more kinase inhibitors, including Novartis’ Gleevec. The drug is also approved in Australia, Canada, China, Hong Kong, Switzerland and Taiwan.

In the first nine months of 2021, Qinlock generated sales worth $63.7 million. The approval in Europe should boost sales in the days ahead.

Please note that Qinlock faces competition from Blueprint Medicines’ (BPMC - Free Report) Ayvakit, which is approved for the treatment of unresectable or metastatic GIST, harboring a PDGFRA exon 18 mutation, including PDGFRA D842V mutations in adults.

Deciphera currently carries a Zacks Rank #3 (Hold). A better-ranked stock in the biotech sector is Editas Medicine, Inc. (EDIT - Free Report) , which has a Zacks Rank #2 (Buy) at present. You can see the complete list of today’s Zacks #1 Rank (Strong Buy) stocks here.

Earnings of Editas Medicine have surpassed estimates in two of the trailing four quarters while missed the same on the other two occasions.