Olin Corporation’s (OLN - Free Report) shares have popped around 27% over the past three months. It is benefiting from the Lake City U.S. Army contract, productivity actions and investment in the Information Technology (IT) project. We are positive on the company’s prospects and believe that the time is right for you to add the stock to portfolio as it looks promising and is poised to carry the momentum ahead.

Let’s take a look into the factors that make this chemical maker a compelling choice for investors right now. 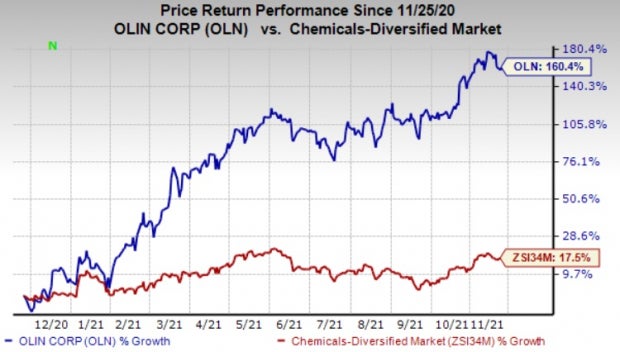 Over the past two months, the Zacks Consensus Estimate for Olin for 2021 has increased around 19.5%. The consensus estimate for fourth-quarter 2021 has also been revised 67.6% upward over the same time frame. The favorable estimate revisions instill investor confidence in the stock.

The Zacks Consensus Estimate for earnings for 2021 for Olin is currently pegged at $8.64, reflecting an expected year-over-year growth of 740%. Moreover, earnings are expected to register a 2,125% growth in fourth-quarter 2021.

Olin’s shares are currently trading at a level that is lower than the industry average, suggesting that the stock still has upside potential.

Going by the EV/EBITDA (Enterprise Value/ Earnings before Interest, Tax, Depreciation and Amortization) multiple, which is often used to value chemical stocks, Olin is currently trading at trailing 12-month EV/EBITDA multiple of 6.34, cheaper compared with the industry average of 9.27.

Olin’s Winchester segment is poised to benefit from the Lake City U.S. Army ammunition contract. The multi-year contract is expected to significantly boost annual profitability of the unit. Sales from the Winchester segment surged 94% year over year in the third quarter of 2021, driven by higher commercial and military sales, including ammunition produced at Lake City as well as higher commercial ammunition pricing.

Olin is also aiming for an improvement in its net debt to adjusted EBITDA ratio through a combination of improved adjusted EBITDA, disciplined capital spending, and debt reduction by the end of 2021. For the full year, it is targeting debt reduction of roughly $1.1 billion by using the cash generated from operations.

The company is also expected to gain from cost and other benefits from its investment in the IT project. The project, which involves implementation of necessary IT infrastructure, is expected to maximize cost effectiveness, efficiency and control over its global chemical operations by standardizing business processes.

Nutrien has an expected earnings growth rate of 212.2% for the current year. The Zacks Consensus Estimate for NTR's current-year earnings has been revised 12.9% upward over the last 60 days.

Nutrien beat the Zacks Consensus Estimate for earnings in three of the last four quarters while missing once. It has a trailing four-quarter earnings surprise of roughly 73.5%, on average. NTR has rallied around 43% in a year.

AdvanSix beat the Zacks Consensus Estimate for earnings in each of the trailing four quarters, the average being 46.9%. ASIX has rallied around 162% in a year.

Intrepid Potash has a projected earnings growth rate of 244.7% for the current year. The consensus estimate for IPI’s current year has been revised 3.3% upward over the last 60 days.

Intrepid Potash beat the Zacks Consensus Estimate for earnings in three of the last four quarters while missing once. It has a trailing four-quarter earnings surprise of roughly 132.9%, on average. IPI shares have surged around 211% in a year.