Details of the Program

Curtiss-Wright anticipates completing the repurchase program of the new authorization by the end of 2021 via a 10b5-1 program. The $100 million share repurchase program will be conducted concurrently with the previously authorized $50 million to be repurchased in 2021. It follows the conclusion of the recent $200 million opportunistic program, which the company had implemented previously.

The company also has the authority to repurchase up to $250 million worth of shares, following the conclusion of the current $100 million share repurchase program. Quite obviously, such initiatives by Curtiss-wright will be accretive to its earnings per share going forward. The move also reflects the company’s disciplined capital allocation strategy and its ability to generate additional cash flow for distribution.

Curtiss-Wright’s focus on returning cash to shareholders is backed by a disciplined and balanced capital allocation strategy. Notably, since 2016, the company has consistently repurchased shares, courtesy of a strong cash flow generation. It has repurchased more than $630 million in share repurchases since 2016, while meeting its capital requirements for growth.

The company has been rewarding shareholders with increased share repurchases activity and dividends quite regularly. Evidently, in September 2021, Curtiss-Wright received an approval to hike its share repurchase authorization by $400 million, thus taking the authorization to repurchase shares up to $550 million in the 2021-2023 period. Earlier, in May 2021, management hiked its quarterly dividend by 6% to 18 cents per share.

Such a solid distribution strategy is backed by its ability to generate strong revenues and free cash flow. Evidently, Curtiss-Wright witnessed a solid 12% year-over-year improvement in third-quarter 2021 adjusted sales. Meanwhile, cash flow from its operating activities worth $155.8 million at the end of September 2021, reflected a massive improvement from year-ago figure of $3.8 million.

Looking ahead, Curtiss-Wright expects to witness sales growth of 7-9% during 2021. Additionally, it anticipates generating free cash flow in the range of $330 million to $360 million during 2021 via its financial discipline. Such solid fundamentals are likely to enable Curtiss-Wright to smoothly continue with its solid capital deployment strategy in the days ahead.

Rewarding shareholders with share buybacks is one way to highlight the financial strength of the company. In this context, other companies in the same sector that have deployed their capital in share repurchasing activity are:

Interestingly, Northrop Grumman reported third-quarter 2021 earnings of $6.63 per share, which surpassed the Zacks Consensus Estimate by 11.8%. Shares of NOC have returned 17.5% in the past one year.

Raytheon Technologies (RTX - Free Report) repurchased $1 billion shares during the third quarter of 2021. The company currently expects to generate free cash flow of approximately $5 billion compared with the earlier range of $4.5-$5 billion in 2021, which is likely to provide a further boost to its share repurchase program.

Raytheon’s third-quarter 2021 adjusted earnings per share of $1.26 outpaced the Zacks Consensus Estimate by 17.8%. In the past one year, RTX stock has gained 17.4%.

L3Harris Technologies (LHX - Free Report) generated $1,988 million in adjusted free cash flow during the first nine months of 2021. The company has returned $3,493 million to shareholders through $2,875 million in share repurchases and $618 million in dividends.

L3Harris Technologies’ third-quarter 2021 adjusted earnings was $3.21 per share, which surpassed the Zacks Consensus Estimate by 1.6%. Shares of LHX have gained 13.1% in the past one year.

In the past one year, shares of Curtiss-Wright have gained 11.7% compared with the industry’s growth of 11.3%. 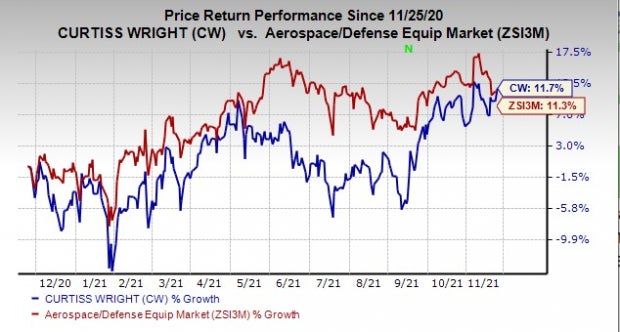