Gilead Sciences, Inc. (GILD - Free Report) announced that the European Commission has granted marketing authorization to Trodelvy (sacituzumab govitecan) as a monotherapy for the treatment of adult patients with unresectable or metastatic triple-negative breast cancer (“TNBC”) who have received two or more prior systemic therapies, at least one of them for advanced disease.

Please note that Trodelvy is a first-in-class antibody and topoisomerase inhibitor conjugate directed to the Trop-2 receptor. The drug is already approved in the United States for the TNBC indication.

The nod in Europe was based on data from the phase III ASCENT study. Data from the study showed that treatment with Trodelvy reduces the risk of death by 49% and improves median overall survival to 11.8 months as compared to 6.9 months with physician’s choice of chemotherapy.

The approval of Trodelvy in the EU was expected, since in October 2021, the European Medicines Agency’s Committee for Medicinal Products for Human Use rendered a positive opinion on the drug, recommending approval for the same for the treatment of second-line TNBC.

Shares of Gilead have rallied 21.2% so far this year against the industry’s decrease of 16.4%. 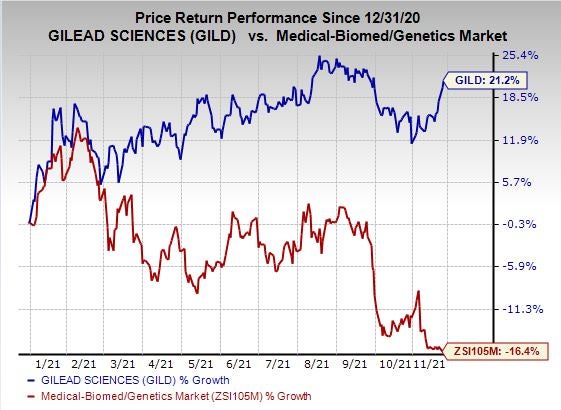 We remind investors that in October 2020, Gilead acquired Immunomedics for approximately $21 billion, which added Trodelvy to its oncology portfolio. The drug generated sales worth $262 million in the first nine months of 2021. The latest approval in Europe, along with potential label expansion, will boost Trodelvy sales in the days ahead.

Trodelvy is also approved in the United States for treating locally-advanced or metastatic urothelial cancer in adult patients who have previously received platinum-containing chemotherapy and either a PD-1 or a PD-L1 inhibitor.

In October 2021, Gilead inked a collaboration and supply agreement with Merck (MRK - Free Report) to evaluate the efficacy of Trodelvy in combination with the latter’s anti-PD-1 therapy, Keytruda (pembrolizumab), as a first-line treatment for patients with locally advanced or metastatic TNBC.

The decline in its HCV business has forced Gilead to diversify into the oncology space, which promises potential despite stiff competition.

HIIV therapy Biktarvy continues to drive growth despite the ongoing impact of the pandemic. However, the loss of exclusivity of Truvada and Atripla has affected the HIV franchise’s performance.

Competition is stiff in the HIV market as well from the likes of GlaxoSmithKline (GSK - Free Report) , among others.

GlaxoSmithKline reported 8% growth in its HIV franchise in the third quarter, driven by its new HIV products Dovato, Juluca, Rukobia and Cabenuva.

To further strengthen its HIV franchise, Gilead has collaborated with a subsidiary of Merck to develop and commercialize long-acting, investigational treatment combinations of Gilead’s lenacapavir and Merck’s islatravir in HIV.

Gilead currently carries a Zacks Rank #3 (Hold). A better-ranked stock in the biotech sector is Precision BioSciences, Inc. (DTIL - Free Report) , which has a Zacks Rank #2 (Buy) at present. You can see the complete list of today’s Zacks #1 (Strong Buy) Rank stocks here.

Earnings of Precision BioSciences have surpassed estimates in each of the trailing four quarters.