In the past week, European carrier Ryanair Holdings (RYAAY - Free Report) .unveiled its schedule for next year’s summer. On a more somber note, RYAAY’s CEO Michael O'Leary reportedly warned that following the renewed surge in COVID-19 cases in Europe, Christmas travel and early bookings for summer are likely to be disrupted.

1. As part of its summer 2022 schedule, Ryanair is adding 24 new routes to popular European destinations. RYAAY will operate more than 500 services from the UK airports next summer. Management said that adding 65 B737-8200 ‘Gamechanger’ aircraft to its fleet by next summer will make the schedule “the most sustainable and environmentally friendly”. This is because the B737-8200 ‘Gamechanger’ aircraft offers 4% more seats, 16% less fuel and a 40% reduction in noise emissions. As part of its sustainable operations, RYAAY launched electric handling at 11 major European airports. The 24 new routes include Birmingham to Zadar, Bournemouth to Bergerac and Zadar, London (Luton Airport) to Burgas, Catania and Lublin, London (Stansted Airport) to Menorca and Madeira, Manchester to Vienna and Madeira as well as Newcastle to Ibiza, Zadar, Chania and Riga.

2. With the winter holiday season round the corner, Alaska Airlines began a seasonal service running through May 22, 2022, to Belize city from Seattle (Seattle-Tacoma International Airport) and a year-round service from Los Angeles (Los Angeles International Airport) on Nov 19. From Los Angeles, Alaska Airlines is operating flights four times per week to Belize City while from Seattle, it is running twice-weekly flights. The new flights to Belize add to the airline’s existing services to Canada, Mexico and Costa Rica from its West Coast hubs.

3. Delta, currently carrying a Zacks Rank #4 (Sell), expects to transport up to 5.6 million passengers in the Thanksgiving period. The projection implies a significant increase from the actual number of passengers (2.2 million) transported by DAL over the Thanksgiving period last year. With friends, families and relatives expected to connect during this phase, leisure travel is expected to get a boost.

To boost operations during the busy period, Delta made additional hirings in customer service and reservations. DAL also boosted its strength regarding flight attendants to meet the anticipated increase in the number of flights in operation.

4. Per a CNBC report, American Airlines and JetBlue asked a U.S. judge to dismiss the lawsuit filed in September on antitrust grounds by the Justice Department (DOJ) and officials in six states. AAL and JBLU are asking for the lawsuit to be dismissed as the DOJ failed to justify the claim that the alliance, which is already in operation, hurt competition or escalated prices. 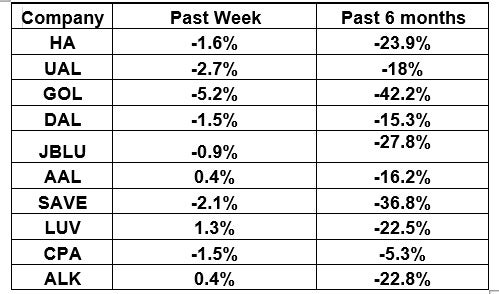 With air-travel demand picking up in the United States, expansion-related updates can be expected from U.S.-based carriers.