Papa John's (PZZA) to Open 60 Restaurants in Kenya and Uganda

Papa John's International, Inc. (PZZA - Free Report) recently announced that it is expanding into Sub-Saharan Africa with its latest franchise partner, Kitchen Express LTD. The move is in sync with its endeavor to strengthen global presence.

Kitchen Express LTD is planning to open 60 restaurants in Kenya and Uganda. The company will open four of these restaurants in 2022, with the first being in Nairobi. Amanda Clark, Papa Johns chief development officer said, “Establishing ourselves in Sub-Saharan Africa for the first time presents a great opportunity for Papa Johns to deliver on our BETTER INGREDIENTS. BETTER PIZZA. promise and continue our global momentum as a brand.”

In the last few years, Papa John's has forayed into countries like Spain, Portugal, Germany, Cambodia, Pakistan, France, Tunisia, Iraq, Morocco, Kazakhstan and Poland. In the past six months, shares of the company have gained 44.2%, compared with the industry’s growth of 2.3%.

Expansion to Act as a Key Growth Driver

Over the next several years, the Zacks Rank #2 (Buy) company plans to increase its international units, a large portion of which will be franchised. During the third quarter of fiscal 2020, the company collaborated with HB Restaurant Group to boost presence in the Philadelphia and southern New Jersey market. Under the development agreement, the company will open 49 new stores between 2021 and 2028. The company intends to tap growth opportunities in France and Italy. For fiscal 2021, Papa John’s expects to inaugurate between 220 and 260 net new restaurants globally. This represents approximately 4.5-5% growth in its system for the year. 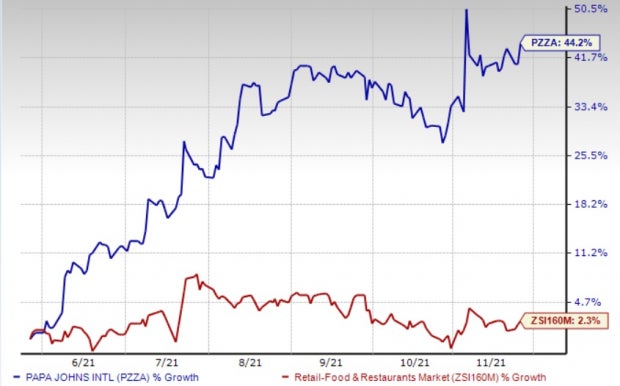 Dave & Buster's Entertainment, Inc. (PLAY - Free Report) , which has been benefiting from reopening initiatives, ramped up vaccinations and excellent operational execution, sports a Zacks Rank #1 (Strong Buy). The company anticipates sustaining the momentum in the days ahead, backed by its strategic initiatives that include new menu, optimized marketing and technology investments.

Dave & Buster's has reported better-than-expected earnings in each of the trailing four quarters, the average surprise being 201.8%. The company’s fiscal 2021 earnings is likely to witness growth of 147.7%. PLAY stock has gained 24% in the past three months. You can see the complete list of today’s Zacks #1 Rank stocks here.

Kura Sushi USA, Inc. (KRUS - Free Report) carries a Zacks Rank #2. The company has a trailing four-quarter earnings surprise of 15.6%, on average. Shares of the company have gained a whopping 114.2% in the past six months.

The Zacks Consensus Estimate for Kura Sushi’s current financial year sales and earnings per share suggests growth of 108% and 85.7%, respectively, from the year-ago period.

Del Taco Restaurants, Inc. (TACO - Free Report) has a Zacks Rank #2. The company has a trailing four-quarter earnings surprise of 25.7%, on average. Shares of the company have gained 3.3% in the past three months.