Equinix Inc. (EQIX - Free Report) recently partnered with EllaLink and announced the full operation of a high-capacity subsea cable system between Europe and Latin America. The new system offers a 50% increase in network performance among the data centers in Brazil, Portugal and Spain. The routes had to previously transit through North America.

Equinix has proficiency in providing state-of-the-art subsea infrastructure. Because of its access to dense, rich ecosystems of networks, clouds, and financial and IT service providers, EQIX was chosen by EllaLink. Moreover, Equinix  earned much reputation and serves as an interconnection partner to 40 and more current subsea cable projects.

Equinix is well-positioned, globally, to bank on robust demand for data-center spaces with its Platform Equinix, which comprises more than 237 data centers across 65 metros and 27 countries.

With access to Equinix's IBX data centers, DISH will be able to deliver secure critical interconnections across the U.S. 5G network.

Robust growth in cloud computing, the Internet of Things and big data, and a greater call for third-party IT infrastructure are spurring demand for data-center infrastructure. This uptrend is likely to benefit Equinix and other data-center landlords like Digital Realty Trust (DLR - Free Report) and CyrusOne Inc. (CONE - Free Report) .
Strength in the artificial intelligence, autonomous vehicle and virtual/augmented reality markets is anticipated to be strong in the upcoming year. As infrastructure providers for the rapidly-growing digital economy, Equinix, Digital Realty and CyrusOne are well-placed for sustainable growth.

Shares of Equinix have gained 8.4% over the past six months, outperforming the industry's growth of 4.7%. EQIX currently carries a Zacks Rank #3 (Hold). You can see the complete list of today’s Zacks #1 Rank (Strong Buy) stocks here. 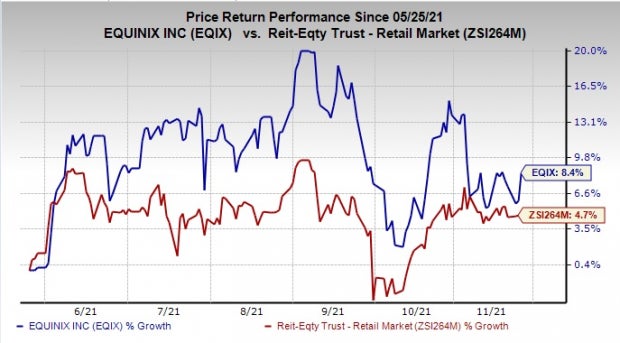 However, the fierce rivalry could propel competitors to resort to aggressive pricing policies, making Equinix vulnerable to pricing pressure.

The Zacks Consensus Estimate for DISH’s current-year fund from operations (FFO) per share has been raised marginally in the past month. DISH currently has a Zacks Rank of 3.

Over the last four quarters, DISH’s FFO surpassed the consensus estimate on three occasions and missed the mark on the remaining one, the average surprise being 25.3%. Shares of DISH have appreciated 4.3% year to date, outperforming the industry’s rally of 0.5%.

The Zacks Consensus Estimate for Digital Realty’s 2021 FFO per share has been raised marginally over the past month. DLR carries a Zacks Rank of 3, currently.

Over the last four quarters, Digital Realty’s FFO surpassed the consensus estimate in all the trailing four quarters, the average being 2.57%. Shares of DLR have appreciated 4.7% in the past three months, outperforming the industry’s rally of 2.7%.

The Zacks Consensus Estimate for CyrusOne’s 2021 FFO per share has moved marginally north in the past month. CONE is currently Zacks #3 Ranked.

Over the last four quarters, CyrusOne’s FFO surpassed the consensus mark on all occasions, the average being 2.32%. Shares of CONE have appreciated 20.9% in the past three months, outperforming the industry’s rally of 2.7%.