Plug Power Inc. (PLUG - Free Report) yesterday announced that it has clinched a contract from Fertiglobe and its partners, Sovereign Fund of Egypt, Scatec ASA and Orascom Construction to provide electrolysis technology for a 100 megawatts electrolyzer. This contract is a testimony to the company’s effort toward becoming a key commercial electrolyzer solution provider and forming partnerships with major players in the green hydrogen sector globally.

It’s worth noting that Fertiglobe is a consortium between the Abu Dhabi National Oil Company and OCI NV with ownership stakes of 42% and 58%, respectively.

As noted, the deal will be a win-win scenario for both parties concerned. Plug Power’s electrolysis technology will facilitate green hydrogen creation required to produce green ammonia at EBIC in Ain Sokhna, Egypt. Plug Power believes that this will help in boosting its sales pipeline for projects related to green hydrogen and green ammonia.

The company’s advanced electrolysis technology will enable Fertiglobe to produce green ammonia, which will serve as a key carrier fuel for storing and transporting hydrogen. This, in turn, will support the decarbonization of several sectors that are primarily responsible for greenhouse gas emissions.

Separately, Plug Power recently closed the buyout of the major technology, equipment and services provider for liquefied hydrogen and other cryogenic gases - Applied Cryo Technologies, Inc. The deal was announced in October this year.

The buyout is expected to be a strategic fit for Plug Power, enabling it to strengthen its green hydrogen ecosystem and reduce costs related to hydrogen infrastructure and logistics networks. The inclusion of Applied Cryo’s advanced cryogenic equipment design and solid manufacturing capabilities will likely help it produce green hydrogen worth more than 1,000 tons per day by 2028.

The company, with $24.4-billion market capitalization, currently carries a Zacks Rank #3 (Hold). It is poised to benefit from strength in its core material handling, on-road and stationary power markets and strong bookings in the electrolyzer business. However, supply chain challenges and increase in labor and raw material costs might affect its performance. 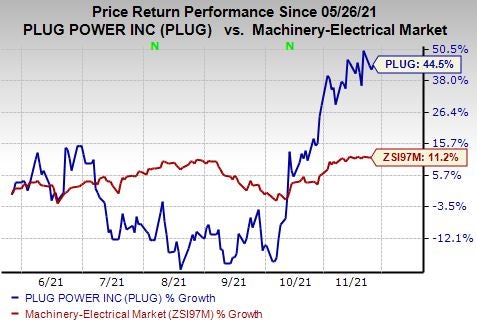 In the past six months, Plug Power’s shares have surged 44.5% compared with the industry’s growth of 11.2%.

Some better-ranked companies from the same space are discussed below.

SPX FLOW, Inc. presently sports a Zacks Rank #1 (Strong Buy). You can see the complete list of today’s Zacks #1 Rank stocks here. Its earnings surprise in the last four quarters was 40.42%, on average.