U.S. telecom stocks declined on average over the past week as increasing coronavirus cases raised fresh lockdown fears across Europe. Higher infection rates across the country fueled speculations about the potency of the vaccines and the need for booster doses, with more Americans heading indoors as temperatures dropped. Lingering concerns regarding the potential interference of the C-Band spectrum with aviation safety standards further forced the telecom industry to tread with caution. However, the downtrend was partially offset by a modest upswing led by a strong rally by some blue-chip stocks and optimism surrounding the nomination of Federal Reserve chief Jerome Powell for a second term.

Two leading U.S. House Democrats urged the FCC to consider the gravity of the issue raised by the Federal Aviation Administration about aviation safety being likely compromised by the planned use of spectrum for 5G wireless communications. The lawmakers sought an immediate restraining order from the FCC for the deployment of the C-Band for wireless use until a thorough risk assessment is conducted. Although the FCC did not comment, a coalition of industry trade groups pointed out that further delay in the deployment of 5G technology would likely hamper the country’s economic growth.

Meanwhile, President Biden continued his hard stance against Beijing and invited Taiwan to the virtual Summit for Democracy, further aggravating the bilateral relations. This followed the signing of the Secure Equipment Act that empowers the FCC to prevent the use of any telecommunications equipment manufactured by China-backed entities in the domestic markets. The FCC also continued to oppose an appeal by China Telecom in the federal court against an earlier directive to bar it from operating in the United States over national security concerns.

1.     Verizon has secured approval from the FCC for the acquisition of TracFone Wireless, Inc., paving the way for the likely closure of the deal inked in September 2020 by this week. The buyout of this subsidiary of Mexico’s largest telecommunications firm, América Móvil, S.A.B. de C.V., is expected to offer enhanced access to Verizon’s wireless network and a suite of mobility products and services to its huge customer base.

Following the merger, Verizon plans to bring its 4G LTE, 5G networks and other innovative technologies to TracFone’s customers. The transaction aligns with Verizon’s growth-oriented Network as a Service strategy and more U.S. consumers will have access to its wireless plans with better experiences.

2.     Ericsson has inked a deal to acquire Vonage Holdings Corp. for $21 per share or almost $6.2 billion in cash. Vonage’s presence in the Communication Platform as a Service segment will allow Ericsson to access a substantial and high growth segment. Ericsson’s leadership in 5G technology will boost the developing space for open network application programming interfaces.

The transaction is expected to deliver near-term revenue synergy opportunities. Ericsson also expects to achieve some cost efficiencies following the completion of the transaction. On completion, Vonage will become a wholly owned subsidiary of Ericsson and will continue to operate under its current name.

3.    Nokia has announced that it has upgraded its 5G testing lab located in Guadalajara, Mexico, to support testing across new uses cases. The state-of-the-art facility will enable the testing of new 5G products and support growing sales and supply chain operations in the region.

The lab provides services to both Latin America and North America. Further, Nokia’s soon-to-come 5G deployments in Mexico and Latin America will be supported by its own operations. It will also benefit from the free trade agreement between the United States, Mexico and Canada.

4.    Knowles recently augmented its portfolio by introducing a new two-way balanced armature receiver in hearing aids to boost the audio capabilities of hearing-impaired persons. The product was developed in collaboration with Lucid Hearing, a pioneering company delivering hearing aid solutions to enable people of all ages to hear better with natural sound quality and reduced distortion.

The new product from Knowles is likely to enable the users to experience audiophile-quality music performance. The Westone Audio High Fidelity DWT is a premium hearing aid with a Receiver in Canal that enhances sound quality for music-listening for the hearing impaired. The balanced armature receiver from Knowles offers discreet size for a comfortable fit, long battery life for all-day wear and unmatched sound clarity for optimal vocal and full-spectrum sound.

5.    Viasat has announced that its mmobility network has become operational in China. This, in turn, is likely to enable the company to offer in-flight connectivity solutions in domestic and international airlines operating in and out of the communist nation’s airspace by leveraging the Ka-band ChinaSat-16 satellite system. 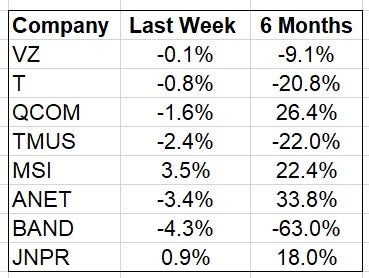 Over the past six months, the Zacks Telecommunications Services industry has declined 12.1% while the S&P 500 has rallied 12.1%. 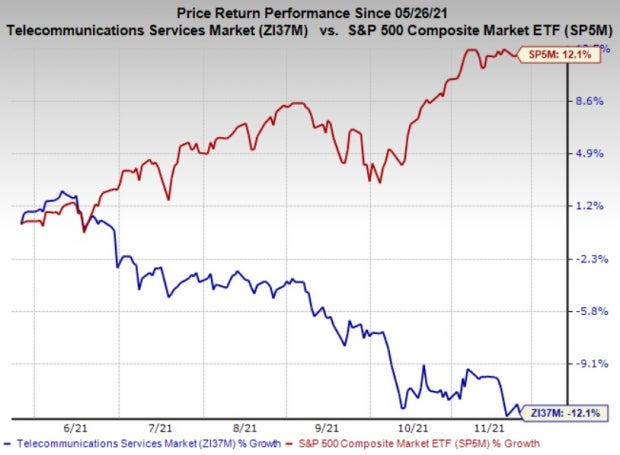