Service firm Aibel received a front-end engineering and design (“FEED”) contract for the unmanned processing platform planned for Equinor’s Krafla field. Krafla is one of the several fields that Equinor and Aker BP are developing together. The FEED study will help connect the unmanned platform to the Aker BP-operated platform on the NOA field.

The study is a continuation of the pre-FEED contract, which was awarded to Equinor in 2020. Krafla will be one of the biggest development projects in the Norwegian Continental Shelf (“NCS”) in the planned realization period. The Krafla field development will support higher activities in the industry.

The Asterix subsea development project in the Norwegian Sea is another FEED study contract, which is expected to increase the longevity of the Aasta Hansteen field. The agreement involves an option for an extended FEED study and the execution of topside modifications to tie back the Asterixgas discovery to the Aasta Hansteen platform.

Equinor awarded a third contract for modifications to Gina Krog and Sleipner A to connect the platforms with a new 23-kilometer pipeline. The pipeline will replace the Randgrid floating storage and offloading vessel, reducing 18,000 tons of emissions from the field annually. Equinor is the operator of the project.

Aibel has been granted another FEED contract for the Kårstø electrification project, which involves the electrification of turbines and pressure boilers at the Kårstø processing plant. The project is expected to reduce carbon dioxide emissions by about 500,000 tons per year.

Aibel is one of the lead partners for developing Equinor’s project portfolio on the NCS. The contracts awarded will require extensive efforts by Aibel’s Norwegian organization, which includes workers in Haugesund, Harstad, Asker and Stavanger. The contracts will ensure high oil and gas activities in the coming years.

Shares of EQNR have outperformed the industry in the past six months. The stock has gained 21.1% compared with the industry's 14% growth. 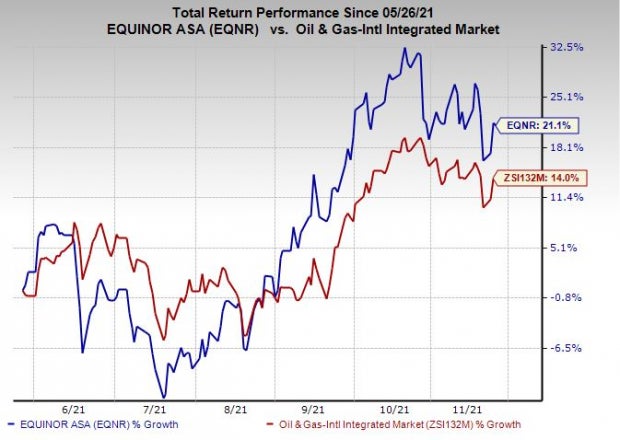 Investors interested in the energy sector might look at the following stock that presently flaunts a Zacks Rank #1 (Strong Buy). You can see the complete list of today’s Zacks #1 Rank stocks here.

SM Energy Company (SM - Free Report) is one of the most attractive players in the exploration and production space, which engages in the exploration, exploitation, development, acquisition and production of natural gas and crude oil in North America. SM's operations focus on the Permian basin, and the South Texas and Gulf Coast region. SM has total 443,188 net acres under its possession, of which 33.5% is developed.

In the past year, shares of SM Energy have increased 612.4% compared with industry’s growth of 111.9%. SM’s earnings for 2021 are expected to surge 695.7% year over year. SM currently sports a Zacks Style Score of A for both Growth and Momentum. The upstream energy player beat the Zacks Consensus Estimate thrice in the last four quarters and missed once. SM Energy has a trailing four-quarter earnings surprise of 126.3%, on average.

In the past year, shares of ExxonMobil have increased 65.2% compared with 40.2% growth of the composite stocks belonging to the industry. XOM’s earnings for 2021 are expected to surge 1,636.4% year over year. ExxonMobil recently announced its fourth-quarter dividend at 88 cents per share, up from 87 cents in the previous quarter. Looking at the dividend history, XOM is strongly focused on returning capital to shareholders. For more than 39 consecutive years, the energy firm has hiked its annual dividend payment.

Centennial Resource Development, Inc. (CDEV - Free Report) , based in Denver, CO, is an independent oil and gas exploration and production company. It primarily develops unconventional hydrocarbon reserves in the Delaware Basin, a part of the prolific Permian Basin. CDEV’s net production in 2020 was recorded at 67,161 barrels of oil equivalent per day, of which oil contributed 53.7% and natural gas and natural gas liquids accounted for the rest.

In the past year, shares of Centennial Resource have gained 465.4% compared with the industry's surge of 111.9%. CDEV is expected to see an earnings growth of 126% in 2021. CDEV witnessed three upward revisions in the past 30 days. In third-quarter 2021, CDEV’s constant focus on cost reduction helped it generate net cash of $153.5 million from operating activities compared with $45.7 million in the year-ago period. Free cash flow generated during the quarter was $77.2 million, which significantly increased from $10.5 million in the year-ago period.

Here's Why You Should Retain Avery Dennison (AVY) For Now