The contract is valued at $212.6 million. The majority of the work related to this deal will be carried out in Ridley Park.

The Boeing MH-47G belongs to the family of CH-47 Chinook multi-role heavy lift helicopters. The helicopter enjoys a massive global demand owing to its advanced and combat proven features that enable it to work in all kinds of combat and tactical missions. The Chinook can be utilized in heavy-left missions like transportation of troops, ammunition, vehicles and equipment. Owing to its proven combat system and ability to operate at low-level in order to avoid radars, the chopper can also be used to perform missions deep in enemy territory even during nighttime.

Undoubtedly, such advanced features have resulted in strong demand for the chopper globally. Evidently, nations such as the U.K., the Netherlands, Spain, Australia, Japan, South Korea, the United Arab Emirates and others bought this multi-mission rotorcraft for their missions, in an effort to strengthen their Defense Force’s capabilities. It is worth mentioning that owing to its multi-mission features, Boeing will continue to register strong booking orders for MH-47G choppers going forward.

Rising geo-political tensions globally have resulted in countries increasing their defense spending to strengthen their defense system. This has led to a huge demand for defense products and weaponries. Consequently, military helicopters, which are an integral part of any military system, have also recorded a surge in demand over the past few years. As nations strengthen their military arsenals and aviation products, we are likely to see a steady flow of contracts from the Pentagon, like the latest one. These deals, in turn, will boost Boeing’s growth prospects in days ahead.

Per Mordor Intelligence projections, the global military rotorcraft market is expected to witness a CAGR of over 3% over the period of 2020-2025. Such projections will not only benefit Boeing but other U.S. aerospace majors namely Airbus SE (EADSY - Free Report) , Lockheed Martin (LMT - Free Report) and Textron (TXT - Free Report) .

For instance, Lockheed Martin Sikorsky unit provides military and rotary-wing aircraft to all five branches of the U.S. armed forces, along with military services and commercial operators in 40 nations. The division is a manufacturer of combat-proven military helicopters including BlackHawk, CH-53K and MH-60R.

Airbus is among the world's largest suppliers of advanced military helicopters. EADSY’S helicopters are in service across more than 150 countries worldwide. Airbus’s product line offers the full spectrum of rotary-wing aircraft solutions for civil, government, military, law enforcement and Para public uses. Some of the significant helicopters manufactured by Airbus are H125M, H135M and H145M.

Airbus has a trailing four-quarter earnings surprise of 69.70%, on average. The company’s consolidated revenues, as of Sep 30, 2021, increased 17% on the back of improved jet deliveries. Airbus stock has returned 14.3% in the last one year.

Textron’s Bell unit is a renowned manufacturer of military helicopters like AH-1Z, UH-1Y, V-22 among others.

Textron’s Zacks Consensus Estimate for 2021 earnings has been revised upward by 1.5% to $3.33 in the last 60 days. TXT, which has been returning value to investors, has appreciated 55.8% in the past one year.

In the past one year, shares of Boeing have lost 3.2% compared the industry’s decline of 32.8%. 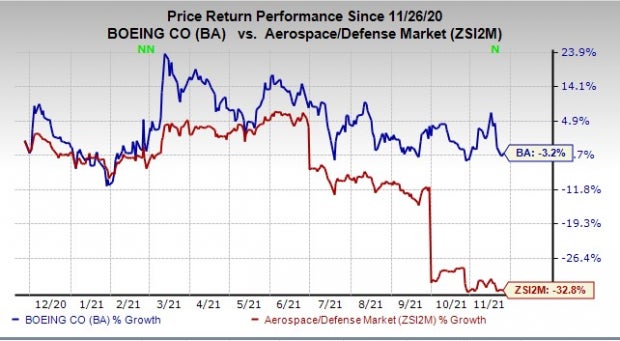