Ciena Corporation (CIEN - Free Report) recently announced that it has collaborated with CityFibre to enhance the latter’s network infrastructure by deploying an 800 Gb/s backbone wavelength. The 800 Gb/s ring is touted as the first such deployment by CityFibre to reach up to 8 million premises in the U.K.

Ciena currently carries a Zacks Rank #3 (Hold). Its shares have gained 16% compared with the industry’s growth of 16.1% in the year-to-date period. 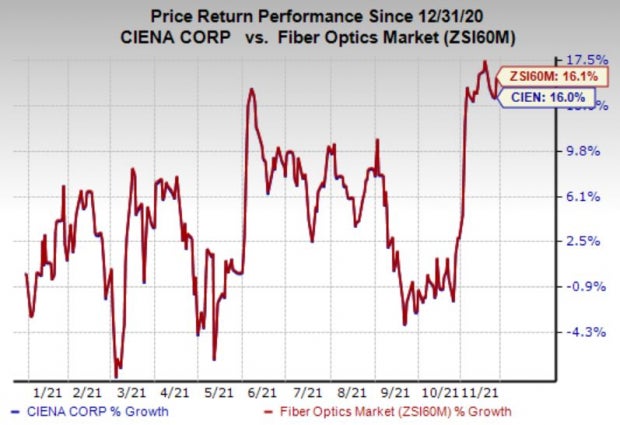 The deployment is part of a national, multi-terabit Dense Wave Division Multiplexing project. Currently, the project is in its first phase with the initial 800 Gb/s wavelength ring linking six ‘super core’ sites this year, namely — Peterborough, Cambridge, Leicester, Milton Keynes, London and Northampton. The first deployment round, which caters to 23 cities, will be followed with two other rings between London, Bristol, Leeds, Leicester, Coventry and Manchester.

CityFibre plans to add 90 locations before the end of 2023 to its deployment list. Post the completion, the U.K.-based entity can seamlessly operate a high availability, fully scalable backbone on Ciena’s superior networking solutions. Further, the diverse end-to-end routing will allow CityFibre to connect its fiber exchanges and ring-based access networks to key third-party datacenters.

The interconnection will help activate a fully automated, cloud-based platform with open access API integration while addressing virtually unlimited data transfer needs. The installation is part of CityFibre’s £4 billion investment program. With this massive investment, CityFibre will be able to not only offer high-quality, efficient broadband services across the U.K. but also accelerate its future product roadmap, thanks to Ciena’s scalable and adaptable network that allows for open networking and maximum programmability.

Riding on the success of multiple network deployment wins, CIEN seems well-positioned, thanks to higher demand for bandwidth and increased network traffic. Its focus on helping carriers transition to next-gen networks places it in one of the fastest-growing segments of the telco space. It is witnessing encouraging signs in the market that include improvements in customer spending. Moreover, its increasingly differentiated position in the marketplace and a strong demand environment instill optimism.

Harmonic delivered a trailing four-quarter earnings surprise of 61.1%, on average. The stock has appreciated 68.7% in the past year. Earnings estimates for the current year for the stock have moved up 23.1% in the past 60 days. HLIT has a long-term earnings growth expectation of 15%.

Clearfield, Inc. (CLFD - Free Report) carries a Zacks Rank #2 (Buy). The Zacks Consensus Estimate for its current-year earnings has been revised 19.4% upward over the past 60 days.

Clearfield delivered a trailing four-quarter earnings surprise of 50.8%, on average. It has surged a stellar 182.5% in the past year.

Qualcomm Incorporated (QCOM - Free Report) also carries a Zacks Rank #2. The Zacks Consensus Estimate for its current-year earnings has been revised 14.6% upward over the past 60 days.

Qualcomm delivered a trailing four-quarter earnings surprise of 11.2%, on average. It has returned 25.7% in the past year. QCOM has a long-term earnings growth expectation of 15.3%.