Petroleo Brasileiro SA or Petrobras (PBR - Free Report) plans to invest $68 billion from 2022-2026 to increase oil production in the subsea pre-salt area. The latest investment is a substantive increase from the previously announced $55 billion for the 2021-2025 period.

In the five-year period, Petrobras will spend $57 billion on exploration and production, about $10 billion more than its previous plan. Of the total, $38.2 billion will be spent on pre-salt development, up from its previously mentioned $32.5 billion. PBR intends to add 15 production platforms, which will enter into production in the next five years.

In the refining segment, Petrobras will invest $6.1 billion over the next five years to produce high-quality derivatives and base-oils to capitalize on the rising demand of the lubricant market. Petrobras plans to generate $15-$25 billion through asset divestments to support investment opportunities and improve the efficiency of operations. The divestments will also generate cash to clear debts.

Petrobras plans to use its innovative capabilities to generate decarbonization solutions and new business lines. Per the plan, PBR will allot $2.8 billion for the decarbonization projects, including emission reduction at its refineries. Petrobras maintains its strategy to focus on projects that generate resources and contribute to Brazilian society.

Petrobras is the largest integrated energy firm in Brazil and one of the biggest firms in Latin America. Its activities include exploring, exploiting and producing oil from reservoir wells, shale and other rocks. It comprises refining, processing, trading and transportation of oil and oil products, natural gas, and other fluid hydrocarbons besides other energy-related operations.

Shares of Petrobras have outperformed the industry in the past six months. The stock has gained 15.7% against the industry’s 11.8% decline. 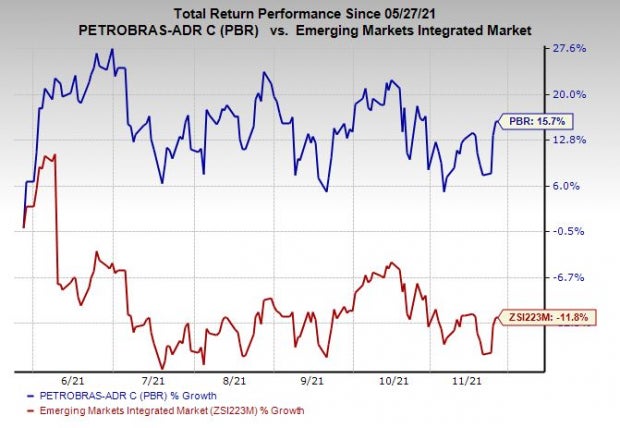 Investors interested in the energy sector might look at the following stocks that flaunt a Zacks Rank #1 (Strong Buy). You can see the complete list of today’s Zacks #1 Rank stocks here.

Centennial Resource Development, Inc. (CDEV - Free Report) , based in Denver, CO, is an independent oil and gas exploration and production company. It develops unconventional hydrocarbon reserves in the Delaware Basin, part of the prolific Permian Basin. CDEV’s net production in 2020 was recorded at 67,161 barrels of oil equivalent per day, of which oil contributed 53.7% and natural gas and natural gas liquids accounted for the rest.

In the past year, shares of Centennial Resource have soared 479% compared with the industry's surge of 116.9%. CDEV is expected to see an earnings growth of 127.6% in 2021. The company witnessed three upward revisions in the past 30 days. In third-quarter 2021, CDEV’s focus on cost reduction helped it generate net cash of $153.5 million from operating activities compared with $45.7 million in the year-ago period. Free cash flow generated during the quarter was $77.2 million, up from $10.5 million in the year-ago quarter.

In the past year, the stock has skyrocketed 220% compared with the industry's growth of 116.9%. In the past 60 days, the Zacks Consensus Estimate for Devon Energy’s 2021 earnings has been raised by 20.6%. It expects to record a year-over-year earnings surge of 3877.8% in 2021. DVN’s free cash flow at the end of third-quarter 2021 was $1.1 billion, up eight-fold from fourth-quarter 2020 levels. The company will continue to prioritize free cash flow generation in 2022 and deploy a major portion of the same to dividends and share buybacks.

PDC Energy (PDCE - Free Report) is an independent upstream operator that engages in the exploration, development and production of natural gas, crude oil and natural gas liquids. PDCE reached its present form following the January 2020 combination with SRC Energy. It is currently the second-largest producer in the Denver-Julesburg Basin. As of 2020-end, PDC Energy's total estimated proved reserves were 731,073 thousand barrels of oil equivalent.

In the past year, shares of PDC Energy have increased 210.1% compared with the industry's growth of 116.9%. PDCE's earnings for 2021 are expected to surge 273.4% year over year. In the past 60 days, the Zacks Consensus Estimate for PDC Energy's 2021 earnings has been raised by 26.8%. PDCE beat the Zacks Consensus Estimate in the last four quarters, ending with an earnings surprise of 51.06%, on average.