Since 2009, ExxonMobil and biotech company Viridos have been exploring and developing oil from algae as a renewable, low-emission alternative to transportation fuels. ExxonMobil backed Viridos for developing advanced bioengineering tools, enabling other parties’ scope to access and develop the technology.

Both companies will develop infrastructure and agronomic methods to produce algae biofuels in commercial quantities. The agreement will help determine and deploy the biofuels needed to reduce emissions from crucial areas of the economy, such as heavy-duty transportation. Viridos also plans to use low-carbon biofuels in aviation, commercial trucking and maritime shipping.

The ExxonMobil-Viridos partnership experienced a turbulent period for the algal biofuel sector. Researchers were hindered in developing a strain, which was high in oil content and grew rapidly. These are two important characteristics for scalable and profitable oil production. The slower growth had an undesirable effect on increasing algae oil production volumes.

In the past few years, Viridos’ expertise in engineering microalgae helped achieve significant growth in bio-oil productivity by increasing the oil content in the algae and the algae yield. Viridos’ advancements in low-carbon biofuels came after its significant gains through research and genomes, mainly with transplanting the first genome, synthesizing the first bacterial genome and creating the first synthetic cell.

The companies intend to enhance participation and urge people to create the ecosystem needed for full-scale deployment.

Shares of ExxonMobil have outperformed the industry in the past three months. The XOM stock has gained 15.4% compared with the industry's 14.4% growth. 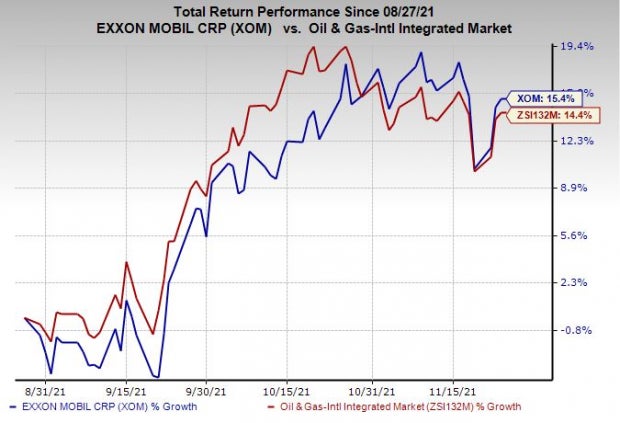 Investors interested in the energy sector might look at the following stock that presently carry a Zacks Rank #2 (Buy). You can see the complete list of today’s Zacks #1 Rank (Strong Buy)stocks here.

Continental Resources, Inc. (CLR - Free Report) is an explorer and producer of oil and natural gas. CLR operates resources across the East, South and North areas in the United States.  Continental Resources' strategic water assets add huge value to its operations in Bakken and Oklahoma. As of Dec 31, 2020, CLR's estimated proved reserves were 1,103.8 MMBoe.

In the past year, shares of Continental Resources have surged 203.8% compared with the industry's growth of 141.7%. CLR's earnings for 2021 are expected to surge 486.3% year over year. CLR currently has a Zacks Style Score of A for Growth and B for Value. Notably, CLR's board of directors increased its quarterly dividend payment to 20 cents per share from 15 cents in the previous quarter. Continental Resources also resumed its existing stock repurchase program. CLR already executed $65 million of share repurchases in the September-end quarter, while $618 million of the share-repurchase capacity remain available.

Northern Oil and Gas, Inc. (NOG - Free Report) is an independent upstream operator engaged in acquiring, exploring, developing and producing oil and natural gas properties. NOG employs a unique strategy wherein it owns non-operating minority interests in thousands of oil and gas wells, which are majority-owned and operated by some leading producers.  As of 2020 end, NOG had a proved reserve base of 122.6 million barrels of oil equivalent.

In the past year, shares of Northern Oil and Gas have gained 221.1% compared with the industry's growth of 116.9%. NOG is also projected to witness a year-over-year earnings surge of 122% in 2021.  NOG witnessed five upward revisions in the past 30 days. Prioritizing returns to investors, NOG recently initiated a 3 cents per share quarterly base dividend, with the first payment made in the third quarter. It plans to hike the payout to 4.5 cents following the closure of the Permian acquisitions. The company’s debt maturity profile is also in good shape, with the earliest maturity ($550 million) in 2028.

Petrobras S.A. (PBR - Free Report) is one of the largest publicly-traded Latin American oil companies, which dominates Brazil's oil and gas sector. PBR produces most of Brazil's crude oil and natural gas. It accounts for almost the entire refining capacity of the country. Petrobras is currently valued at $67.4 billion.

In the past year, shares of Petrobras have gained 15.4% against the industry's 9% decline. PBR is expected to see earnings growth of 579.1% in 2021. PBR currently has a Zacks Style Score of A for both Value and Growth. In the third quarter, Petrobras generated a positive free cash flow for the 26th consecutive quarter, with the metric coming at $9,019 million, rising from $7,468 million recorded in last year's corresponding period.