Newmont Corporation (NEM - Free Report) inked an agreement to sell the Kalgoorlie power business to Australia-based gold producer, Northern Star Resources Limited. The sale of this non-core asset will enable the company to deliver long-term value at the Boddington and Tanami operations and work on its future project pipeline through active exploration campaigns.

Per the agreement, Newmont will receive $95 million in cash. This includes the $25 million received from Northern Star as an option payment to buy the power business when it purchased Newmont’s 50% interest in Kalgoorlie Consolidated Gold Mines (“KCGM”). Northen Star has exercised this option.

The Kalgoorlie power business provides electricity to KCGM through a suite of contracts, licenses, approvals and third-party arrangements—including a 50% interest in the 110MW dual fuel gas turbine Parkeston Power Station near Kalgoorlie. The power station is a joint-venture project with Canadian energy utility, TransAlta Corporation. The Kalgoorlie power business is a profitable asset for Newmont since the sale of its stake in KCGM.

Newmont stated that Boddington faced issues from severe weather and Nevada Gold Mines is also witnessing headwinds. The revised upside in the cost outlook includes the impact of  lower-production volumes as well as elevated royalties and production taxes at higher gold prices.

Shares of Newmont have declined 4.9% in the past year compared with a 1.6% rise of the industry. 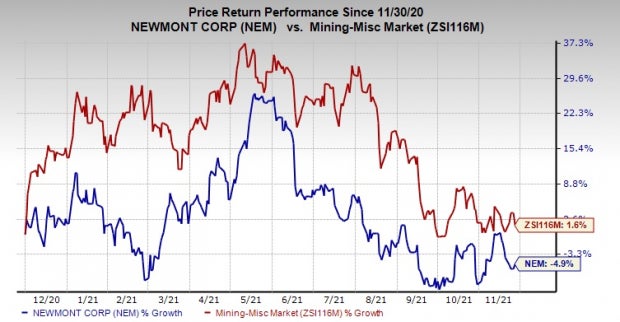 Nucor beat the Zacks Consensus Estimate for earnings in two of the last four quarters, while missing the same twice. The company has a trailing four-quarter earnings surprise of roughly 2.74%, on average. The stock has surged around 112.2% in a year. NUE currently carries a Zacks Rank #2 (Buy). You can see the complete list of today’s Zacks #1 Rank (Strong Buy) stocks here.

Chemours beat the Zacks Consensus Estimate for earnings in all of the last four quarters. The company has a trailing four-quarter earnings surprise of roughly 34.2%, on average. Its shares have also rallied around 26.8% over a year. CC currently sports a Zacks Rank #1.

Allegheny beat the Zacks Consensus Estimate for earnings in each of the last four quarters. ATI has a trailing four-quarter earnings surprise of 98.1%, on average. The company’s shares have gained around 15% in a year. It currently carries a Zacks Rank #2.