1. XPeng reported third-quarter adjusted loss per American Depositary Share of 29 cents. The China-based EV maker posted revenues of $887.7 million, up a whopping 187.4% year over year on the back of robust deliveries. Deliveries totaled 25,666 units, skyrocketing 199.2% year over year. The P7 model constituted 76.8% of total deliveries. The bottom line was adversely impacted by escalating R&D and SG&A costs, which summed $196.2 million and $238.8 million, reflecting a year-over-year surge of 99% and 27.8%, respectively.

2. NIO announced a partnership with energy giant Shell to jointly construct and operate a network of co-branded battery swapping stations. The agreement encompasses a plan to develop a network of 100 battery swapping stations in China by 2025, starting with two pilot sites. Cooperation in Europe will commence with the construction and operation of pilot stations in 2022.

The deal highlights Shell’s commitment to expedite the transition to green vehicles globally and leverages NIO’s already massive network of fast-charging stations, battery swapping stations and destination chargers in China. For NIO, the European leg of the deal is particularly enticing as it will enable it to expand operations internationally. Shell Recharge high-speed charging options at NIO sites and additional battery swapping stations at Shell locations will benefit the firms.

3. XL Fleet clinched a major contract from the Department of Defense (“DoD”) to equip a slew of tactical vehicles with hybrid conversion technology over the next year. Per the pact, XL Fleet will hybridize tens of thousands of vehicles across a wide range of military applications. The contract is part of DoD’s emission-reduction efforts for its fleet of more than a quarter million U.S. Army vehicles.

XL Fleet is currently developing hybrid conversion kits for deployment in the military fleet, which would help reduce emissions and boost fuel efficiency. The contract provides XL Fleet with the opportunity to become a long-term preferred choice for the government to electrify fleets. Quoting XL Fleet’s founder and President, “XL Fleet’s proven technology, flexible platform and deep experience in applying sustainable technologies to fleet vehicles make us an ideal fit for the U.S. military’s specialized needs for this project.”

4. General Motors acquired a 25% stake in electric-boat startup Pure Watercraft. Per the deal, worth $150 million, General Motors will be Seattle-based Pure Watercraft’s components supplier. It will also co-develop new products and provide engineering, design and manufacturing expertise to aid the company in establishing new factories. General Motors is optimistic that its present expertise in deploying technology across rail, truck, and aerospace industries, coupled with the latest collaboration with Pure Watercraft, will effectively contribute toward zero-emission marine products.

In another development, General Motors will start delivering the GMC Hummer electric pickup truck in December. The starting price is above $100,000, and it plans to add subsequent models with higher EV driving ranges and lower starting prices in 2023. 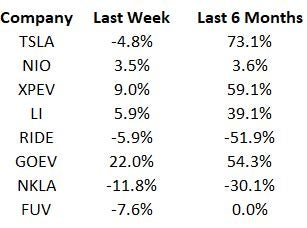 Here's Why You Should Retain B2Gold (BTG) Stock Right Now